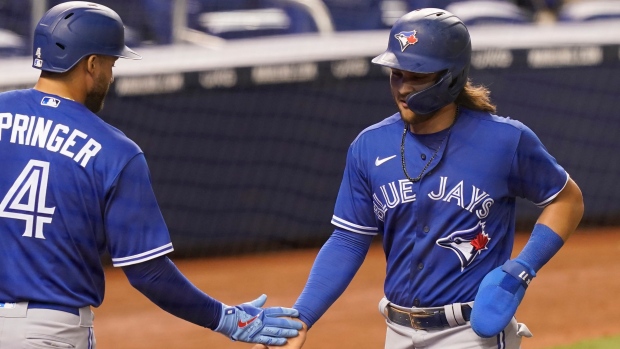 The hits came with one out against Yimi Garcia (3-6), who entered the game after Sandy Alcantara stymied the Blue Jays while throwing only 86 pitches in eight innings.

MLB RBIs leader Vladimir Guerrero Jr. singled home the Blue Jays' first run in the sixth. They improved to 12-2 in interleague games, including 3-0 against Miami.

Toronto's Ross Stripling allowed one run in six innings. Tim Mayza (2-1) pitched a perfect eighth, and Jordan Romano faced only three batters in the ninth for his fourth save to complete a three-hitter.

Starling Marte led off Miami's ninth with an infield single but was thrown out trying to steal second.

Both starting pitchers passed inspections by the umpires between innings as part of MLB's crackdown on sticky substances.

Toronto outfielder George Springer went 0 for 4 in his return to the lineup. He was activated after missing 66 of the first 70 games because of a strained right quadriceps.

The Blue Jays scratched out a run in the sixth. Bo Bichette was hit by a pitch, stole second, took third on a wild pitch and came home on an opposite-field single by Guerrero.

The Marlins' Trevor Rogers (7-3, 1.87), who leads all MLB rookies in wins, ERA and strikeouts, is scheduled to start in the series finale Wednesday against Robbie Ray (4-3, 3.50) in a matchup of left-handers.