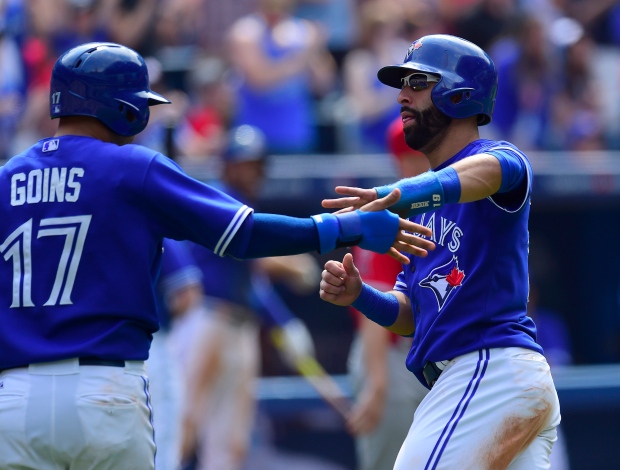 TORONTO -- Jose Bautista belted his seventh homer of the season as the Toronto Blue Jays ended a five-game losing streak Monday with a 10-6 victory over the Los Angeles Angels at Rogers Centre.

Bautista, Josh Donaldson and Canadian Russell Martin had three hits apiece for the Blue Jays, who outhit the Angels 17-12. Steve Tolleson chipped in with two hits and two runs to help Toronto (18-22) take the opener of the four-game series.

Toronto was in desperate need of a win after being swept in Houston to cap a 1-6 road trip, which knocked the Blue Jays into the American League East basement.

The bottom of the Blue Jays' order helped push the first run across in the second inning.

Chris Colabello drew a leadoff walk against L.A. starter C.J. Wilson and moved to third on a double by Tolleson. Ryan Goins hit a chopper to the first-base side that was enough to bring the run home.

Josh Donaldson drove a pitch down the left-field line to score Tolleson. Left-fielder Collin Cowgill delivered an excellent throw to third base as Goins was tagged out.

Bautista brought Donaldson home with a double and Edwin Encarnacion followed by lashing a ball that glanced off the glove of a fully stretched Freese at third base. Bautista scored to make it 4-0 and Wilson finally ended the frame by getting Danny Valencia to hit into a forceout.

Pujols touched him up for a no-doubt solo shot in the fourth inning, taking a 1-0 pitch into the second deck for his seventh homer of the year.

Los Angeles put runners on the corners with one out and they both moved up on a wild pitch, with Kole Calhoun coming across and Freese moving to second.

Iannetta hit a two-out double to bring Freese home and make it a one-run game. Cowgill flew out to end the threat.

Redmond, who was called up from triple-A Buffalo on Sunday, allowed four hits, three earned runs and a walk over four innings. He struck out three and his earned-run average fell to 11.88 from 16.62.

Freese tied the game in the sixth by taking a first-pitch offering from Ryan Tepera over the wall for his seventh homer. Tepera was pulled after giving up a one-out double to Iannetta.

Roberto Osuna (1-0) came on and fanned Cowgill before giving up an RBI single to Johnny Giavotella.

Mike Morin (1-1) replaced Wilson in the bottom of the sixth and he loaded the bases with two outs. Right-hander Vinnie Pestano relieved Morin and Martin greeted him with a two-run single that restored Toronto's lead.

Valencia followed with a two-run double that gave Toronto an 8-5 edge. The Blue Jays padded their lead in the seventh inning as Bautista hit a no-doubt, two-run shot on a 3-2 pitch from Cesar Ramos.

Iannetta hit his first homer of the year in the eighth inning off southpaw Aaron Loup. Brett Cecil worked a scoreless ninth for Toronto.

Notes: Wilson gave up 10 hits, four earned runs, two walks and struck out a pair over five innings. ... Redmond started the season with the Blue Jays but was designated for assignment a month ago. It was his first start and third appearance for Toronto this season. ... Announced attendance was 29,306 and the game took three hours 28 minutes to play. ... The roof remained open despite the presence of threatening clouds in the later innings. ... The Blue Jays are looking for their first series win over the Angels since 2007. ... Toronto right-hander Aaron Sanchez is scheduled to start on Tuesday night. Left-hander Hector Santiago gets the nod for the Angels.