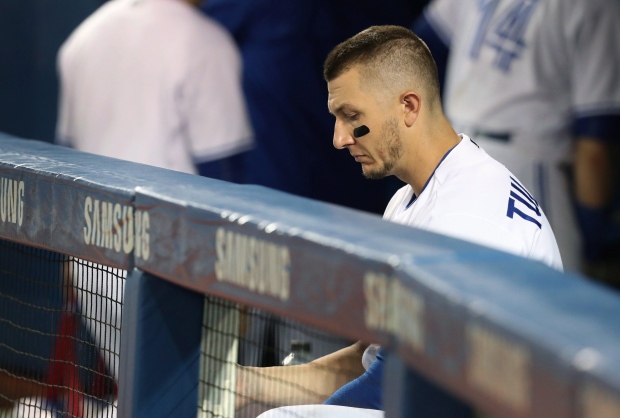 Toronto Blue Jays' Troy Tulowitzki sits in the dugout well after most of his teammates have exited for the clubhouse after losing for the third straight night to the Tampa Bay Rays in Toronto on Wednesday, May 18, 2016. (The Canadian Press/Fred Thornhill)

TORONTO -- Two blowout losses, a series sweep and a losing streak that is showing no signs of ending.

The Blue Jays left Toronto after another loss to Tampa Bay on Wednesday searching for answers and hoping a return to the road will help them end a nasty funk.

R.A. Dickey gave up three home runs as the Rays doubled the Blue Jays 6-3, handing them their fifth loss in a row.

"We ran into a team that has a lot of momentum," Dickey said. "They're swinging the bat really well. We are not and we're not pitching really well. When you combine those things together, you get swept.

"That's part of baseball and that's what's hard about it."

The Rays (19-19) recorded their first three-game sweep at Rogers Centre in almost three years. Tampa Bay outscored Toronto 30-7 in the series and set a franchise record for a three-game set with 44 hits.

"It's a lot easier to hit when you're up there every other inning or every inning versus every third inning," Morrison said.

The Blue Jays will try to turn things around Thursday as they kick off a four-game series against the lowly Minnesota Twins, who are last in the American League standings at 10-29.

Jimmy Paredes, who played third base for Toronto with Josh Donaldson getting a rest day, hit a solo shot in the second inning off Rays starter Jake Odorizzi (1-2). It was his first homer of the year.

Morrison's no-doubt blast hit the facing of the second deck in right-centre field. Jennings followed with his third homer of the season.

It was Morrison's first home run this season and the first time the Rays have hit consecutive homers this year.

Odorizzi walked the first two batters in the bottom half of the frame and Paredes moved them both into scoring position on a groundout. But Toronto stranded them as Kevin Pillar grounded out and Ryan Goins flied out.

"When you don't cash in when you get some men on base, it's tough," said acting Blue Jays manager DeMarlo Hale. "We're looking for things to change. This is a good club in here, (they're) accomplished hitters who have done things in this game. There's a trust factor that you definitely have.

"It doesn't matter who's on the mound (for the opposition). It will change and I'm looking forward to it."

The Rays added a run in the fifth as Beckham led off with a double and scored when Paredes threw wide to first base. Michael Saunders halved the deficit in the same inning with a solo shot, his sixth home run of the season.

Kiermaier's rainbow blast was his fifth homer of the year.

"Hitting comes and goes," Kiermaier said. "Right now it's definitely in full force for us. Everyone is really starting to get on board."

The Blue Jays made it interesting in the eighth as Edwin Encarnacion hit a solo shot -- his eighth homer of the season -- and Justin Smoak followed with a two-out double to bring the potential tying run to the plate. But Tampa Bay closer Alex Colome came on and struck out Troy Tulowitzki.

The Rays added an insurance run in the ninth as Beckham hit a double off reliever Gavin Floyd and later scored all the way from second base on a wild pitch. Colome finished up in the ninth for his 10th save.

Dickey (2-5) worked six innings and gave up eight hits, four earned runs and a walk. He had six strikeouts.

"You're not going to see panic in here," Dickey said. "But at the same time there is a sense of urgency that we need to start doing some things better -- myself included -- and we need to take ownership of that. We can't walk around game after game and say, 'Oh we're better than that.'

"We've got to go be better than that and I think everybody in here knows that."

Notes: Hale filled in for Blue Jays skipper John Gibbons, who served the second game of his three-game suspension. ... Home plate umpire Marty Foster took a foul ball off the mask in the sixth inning. He was examined by trainers from both teams and stayed in the game. ... Announced attendance was 29,078 and the game took two hours 48 minutes to play. ... Toronto right-hander Marco Estrada (1-2, 2.89 earned-run average) will start Thursday night against Ervin Santana (1-2, 3.38). ... Blue Jays second baseman Devon Travis will join the triple-A Buffalo Bisons on Thursday as he continues his injury rehab assignment. He underwent left shoulder surgery in the off-season.