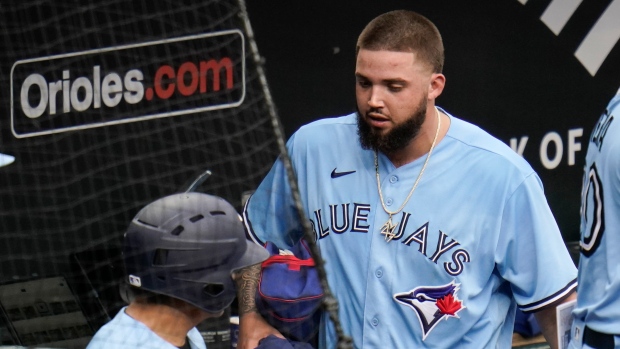 Toronto Blue Jays starting pitcher Alek Manoah heads to the clubhouse after he was ejected in the fourth inning of a baseball game, Saturday, June 19, 2021, in Baltimore. The incident happened as a result of Manoah hitting Orioles' Maikel Franco with a pitch after Manoah gave up back-to-back home runs to Ryan Mountcastle and DJ Stewart. Also seen is Blue Jays' catcher Reese McGuire, second from left. (AP Photo/Julio Cortez)

Manoah has elected to appeal the suspension and will be available until the process is complete.

Blue Jays manager Charlie Montoyo received a one-game suspension for Manoah's actions on Saturday in a game at Baltimore. He said he would serve his suspension in Tuesday's opener of a two-game series between the Blue Jays and Marlins at Miami.

He didn't say who would serve as manager Tuesday, indicating it might be approached by committee between the other coaches.

Manoah, making his fifth major league start, gave up consecutive homers to Ryan Mountcastle and DJ Stewart in a five-pitch span of the fourth inning at Camden Yards on Saturday, his third and fourth homers allowed in the game. The highly touted 23-year-old then hit Franco on the left shoulder with his next pitch, a 93.8 mile-per-hour offering.

Franco yelled at Manoah, the pitcher took several steps toward the plate and held out both arms, and the dugouts and bullpens emptied for several minutes of shoving. Manoah was ejected.

“I don't agree with it, but that's the rule,” Montoyo said before the game.

Toronto rallied with six runs in the ninth inning to win 10-7.

The announcement of Manoah's suspension came shortly after the Blue Jays said star outfielder George Springer would return to the lineup and play centre field in Tuesday's game.

Springer signed a six-year, US$150-million deal with Toronto last off-season, but a left oblique injury has limited him to just three appearances, all at designated hitter, this season.