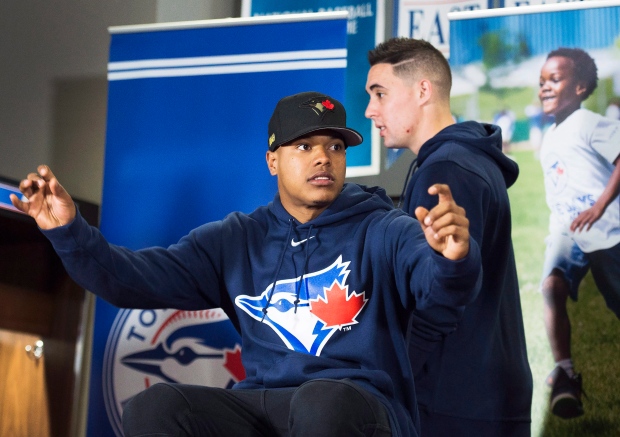 The young right-hander oozes confidence and is up for whatever challenge comes his way. He also appears to be the real deal on the mound.

After a solid rookie season, Stroman's brief but impressive 2015 campaign has made him the favourite to replace David Price as the team's No. 1 starter.

"Every time I went out there I felt like I was the guy," Stroman said. "That's the kind of atmosphere that we've created, the family that we have here. The confidence that the guys have behind me, honestly, I felt like the guy the entire time I've been here. But I'm excited to actually be the guy this year and to go out there every five days and be the one that everyone counts on.

"I've done everything in my preparation to make sure that I'm at my best ability out there every fifth day. So I'm excited for 2016, my first Opening Day. I can't wait."

Stroman's big-league debut came a month into the 2014 season. He also missed the season opener last year after tearing a knee ligament at spring training.

The 24-year-old Medford, N.Y., native worked hard to get back in form and surprised many baseball observers by returning late in the season. He was a key addition down the stretch, going 4-0 with a sparkling 1.67 earned-run average to help the Blue Jays make their first playoff appearance in 22 years.

The rotation will have a different look this season after Price and veteran left-hander Mark Buehrle were lost to free agency. Stroman, Marco Estrada and knuckleballer R.A. Dickey will be expected to anchor a crew that will likely include southpaw J.A. Happ and possibly Aaron Sanchez, Jesse Chavez or Drew Hutchison.

Sanchez, who's hoping to be stretched out as a starter, could also return to the setup role that he had over the second half last season. Brett Cecil, Roberto Osuna and newly acquired reliever Drew Storen are expected to be the key cogs in the bullpen.

"If you throw the four of us out of the pen, I think that's pretty lethal," Sanchez said this week at an availability at Rogers Centre. "That's some electricity. And if I get to start, that's even better."

It has been an eventful off-season in Toronto with the retirement of president Paul Beeston and departure of Alex Anthopoulos, who declined an offer to return as general manager and later joined the Los Angeles Dodgers' front office. New president Mark Shapiro brought in Ross Atkins as Anthopoulos's replacement.

The Blue Jays will bring back most of their position players -- minus left-fielder Ben Revere who was moved in the Storen deal -- and should be a contender again in the American League East.

However, their division rivals have been busy this off-season and the competition in the East should be tougher. Many Toronto fans were critical that the Blue Jays have been rather quiet on the free agent front and didn't aggressively try to retain Price, who was acquired during a wild week of deadline deals last summer that helped propel the team to a division title.

Stroman said he's heard "the noise" but doesn't pay much attention to it.

"I'm excited with where we're at," he said. "I'm not really focused on any other team but us. I think the group of guys that we have, I think we're capable of doing some very special things this year. Storen is unreal. I've been a huge fan of him since Day 1. That's a huge addition to our team. Now we have Cecil, Storen and Osuna back there.

"I have 100 per cent confidence to hand the ball off to those guys, 100 per cent any day of the week. So I don't think enough people are talking about those seven, eight, nine- (inning) guys because it's pretty legit."

Spring training begins next month in Dunedin, Fla. Pitchers and catchers are slated to report Feb. 22, four days ahead of the full squad.