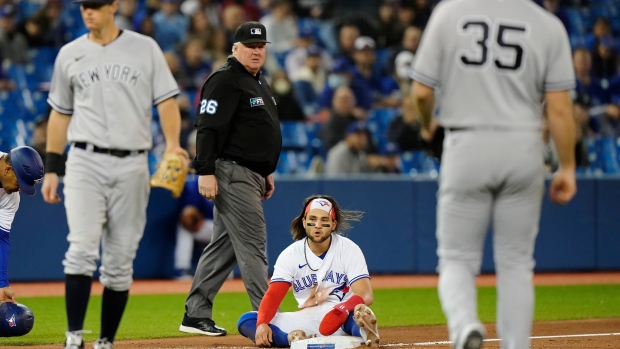 Toronto Blue Jays' Bo Bichette (11) sits on third base after being thrown out trying to advance against the New York Yankees during sixth inning American League MLB baseball action in Toronto on Tuesday, September 28, 2021. THE CANADIAN PRESS/Frank Gunn

TORONTO - Everything was set for the Toronto Blue Jays in their return to Rogers Centre for the opener of a season-ending homestand on Tuesday.

A playoff-like atmosphere to set the tone for a critical three-game series. Double the usual number of home fans thanks to a stadium capacity increase. And most importantly, a chance to beat New York and make up ground in the wild-card race.

The surging Yankees had other ideas.

Despite the loss, Toronto remained one game behind the Boston Red Sox, who are clinging to the second wild-card spot. The must-win feeling that has hovered over the Blue Jays this month will only intensify now with five games left to play.

“Just forget about tonight and be ready to play tomorrow,” said Toronto manager Charlie Montoyo. “We've done it before so why not do it again.”

The Yankees (90-67) moved three games up on Toronto (87-70) and extended their winning streak to seven games. The Blue Jays have lost five of their last eight.

“I know where we are (in the standings) but I also know that we've just got to keep the blinders on and (there's) another important one tomorrow,” said Yankees manager Aaron Boone.

The slumping Red Sox, who were swept by New York last weekend, dropped a 4-2 decision to the Baltimore Orioles for their fourth straight loss. The Seattle Mariners, meanwhile, were tied with Toronto entering their game against the visiting Oakland Athletics later Tuesday night.

A recent loosening of venue capacity restrictions in Ontario allowed a lively crowd of 28,769 to take in the battle between AL East rivals. Toronto leadoff hitter George Springer gave fans something to cheer about early by staking the Blue Jays to a first-inning lead.

He was walked by Yankees starter Jameson Taillon, stole second and scored on a Bo Bichette single.

Taillon, making his return after a three-week absence due to a right ankle tendon issue, took himself out of the game after 2 1/3 innings when he aggravated the injury. He was replaced by right-hander Michael King (1-4).

Blue Jays starter Hyun Jin Ryu was reinstated earlier in the day after a stint on the 10-day injured list (neck). Judge worked a full count on the veteran left-hander in the third inning before hitting his 37th home run of the season.

Toronto's Corey Dickerson got the start in left field with Lourdes Gurriel Jr., serving as designated hitter after missing three games due to a finger injury. Bichette led off the fourth with a single and Dickerson drove him in with a double to restore Toronto's one-run lead.

The Yankees got to Ryu again in the fifth when Urshela hit a one-out single and moved to second on a DJ LeMahieu walk. Anthony Rizzo flared a single to left field and Dickerson's throw hit Urshela as he ran down the third-base line.

Sidearmer Adam Cimber relieved Ryu with two runners in scoring position. Judge lined out to right field to bring home LeMahieu on a sacrifice fly with the go-ahead run and Cimber got Stanton on a groundout to limit the damage.

Toronto reliever Nate Pearson worked a scoreless frame before Trevor Richards was tagged for three runs in the seventh. LeMahieu singled and Judge walked before Stanton hit a no-doubt blast for his 35th homer of the year.

Urshela's solo shot in the ninth inning was his 14th homer of the season. New York outhit Toronto 11-3.

Ryu (13-10) gave up six hits, three earned runs and a walk while striking out three.