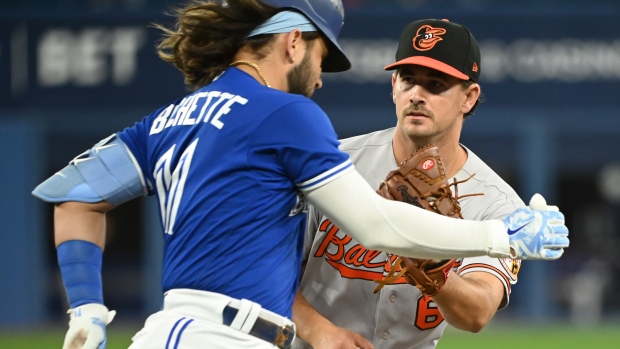 TORONTO - After eighth defeats in their last 10 outings, the Toronto Blue Jays remain faithful that a turnaround will soon present itself.

The struggling Blues Jays (61-54) dropped their third in a row, a 4-2 decision to the thriving Baltimore Orioles on Tuesday. The Orioles (61-55) have won 10 of 14 games in August to climb within a half-game of Toronto for the third and final American League wild-card spot.

“You just have to trust yourself,” said Vladimir Guerrero Jr., who drilled a two-run line drive blast in the first inning for his team-leading 25th homer.

“I've been telling the guys to keep trusting themselves and keep working hard. It will turn around somehow.”

Toronto starter Alek Manoah (12-6) had his no-hitter bid broken up by a two-out single to right field by Rougned Odor in the fourth inning.

The Orioles then got to the Blue Jays ace on the third time through their lineup. After two long fly ball outs to begin the fifth inning, Cedric Mullins and rookie Adley Rutschman belted homers to centre field and right centre field to tie the game.

Manoah's 107-pitch effort concluded an inning later. He issued a one-out walk to Terrin Vavra, who advanced to second on Odor's groundout. Ramon Urias then knocked in Vavra.

Manoah then walked the next batter for his final pitches. Urias scored on Ryan McKenna's single to right off reliever Anthony Bass.

Blue Jays outfielder Teoscar Hernandez had a chance to throw out Urias at the plate, but catcher Alejandro Kirk failed to grab the one-hopper.

Toronto's Matt Chapman had the bases loaded in the third but hit into an inning-ending double play.

“The key is we are not getting it done with runners in scoring position,” said Guerrero when asked the difference between their recent struggles and their seven-game win streak before the all-star break a few weeks ago.

But other than an infield hit by Santiago Espinal in the fourth and his bunt single in the seventh, the Blue Jays did not have any other runners in the final six innings.

“We're still in a playoff spot, and we know we're a playoff team,” Manoah said. “We're struggling a bit right now, but we'll get it rolling again.”

“This is a close group, and it's a really talented group,” Schneider said. “We have no doubt that we're going to be playing better baseball very soon, and between the guys we have and the guys who are established veterans in the clubhouse, I know that they're gonna pick it up.

NOTHING TO SHOW FOR BO

Bichette was moved to seventh in the batting order after occupying the fourth or fifth spot with Schneider at the helm. It was Chapman who moved up the order to the fifth slot.

“Just shaking things up, giving guys different looks, and seeing how it shakes out,” Schneider said.

The 37,940 fans at Rogers Centre greeted Odor with jeers every time he made a plate appearance this series.

Six years ago, the second baseman ignited a brawl when he punched former Blue Jays slugger Jose Bautista in the face for a hard slide at second in a May 2016 game in Texas, when Odor was a member of the Rangers.

Blue Jays righty Ross Stripling (5-3) returns to the mound for the series finale against Baltimore's Austin Voth (3-1) on Wednesday afternoon. Stripling (right glute/hip strain) hasn't started for Toronto since a 5-3 win at home against the Detroit Tigers on July 30.

This report by The Canadian Press was first published Aug. 16, 2022.