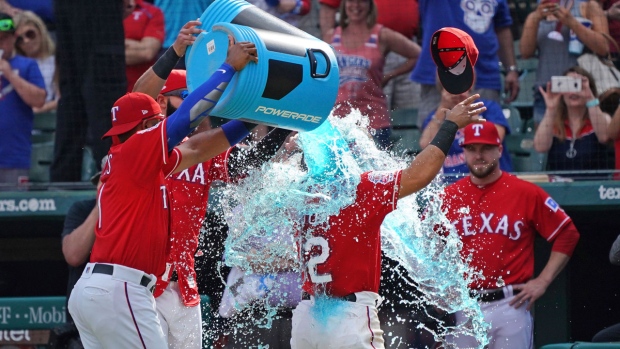 ARLINGTON, Texas -- Rougned Odor and Asdrubal Cabrera each homered and combined for seven RBIs, and the Texas Rangers rolled past the Toronto Blue Jays 10-2 on Sunday.

Odor had been in an 0-for-21 slump that reduced his average to .122 before he drove a pitch from Clay Buchholz over the back bullpen wall in right-centre field for a two-run homer in the second inning.

Odour's homer followed a run-scoring double by Cabrera, who had been hitless in his previous nine at-bats. Odor also had a run-scoring single in the fifth.

In the third, Cabrera added a three-run homer -- his seventh of the season, all at home -- to put Texas ahead 6-1.

Drew Smyly came off the injured list to hold Toronto to one run and two hits in four innings in his first game since April 19. He had been sidelined with mid-arm nerve tightness.

The first hit Smyly surrendered was Eric Sogard's two-out homer in the third.

Kyle Dowdy (2-1) entered the game to start the fifth with a 7-1 lead and pitched two scoreless innings.

Texas won the final two games of the three-game series to move back to .500, while the Blue Jays ended their road trip at 1-5.

Buchholz (0-2) allowed seven runs in four innings, falling to 0-5 in his career at Texas.

Toronto used four relief pitchers before catcher Luke Maile made his first major league pitching appearance in the eighth. Maile retired all three batters he faced and struck out Shin-Soo-Choo, who had three singles and a walk in his first four plate appearances.

Rangers: 1B Ronald Guzman (strained right hamstring) went 2 for 5 with a homer and double in the first game of a rehab assignment at Double-A Frisco. Manager Chris Woodward said Guzman would rejoin the Rangers Friday at Houston.

Smyly's 68 pitches were the fewest in his five starts, but he lasted less than four innings in three of those. To make room for him on the active roster, the Rangers optioned rookie right-hander Wei-Chieh Huang to Triple-A Nashville.

Toronto rookie right-hander Elvis Luciano faced Rangers shortstop Elvis Andrus once in each of the last two games of the series. Luciano retired Andrus on a flyball on Saturday, and Andrus lined a two-run single on Sunday.

Rangers: At Pittsburgh on Tuesday, RHP Adrian Sampson (0-1, 3.58), seeking his first major league win in his ninth start, will go against LHP Steven Brault (0-1, 8.31), making his first start since April 27 of last year. Sampson pitched 5 2/3 scoreless innings against the Pirates in his previous start on April 30.