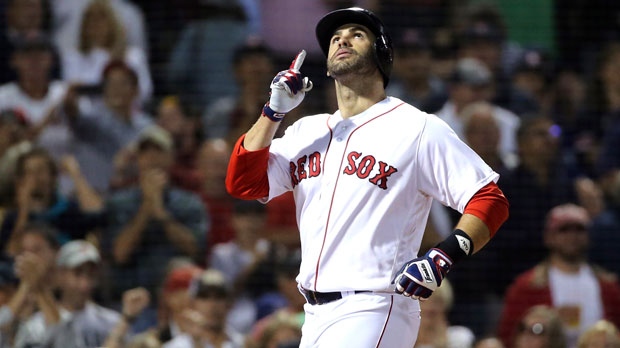 Boston Red Sox's J.D. Martinez celebrates his solo home run as he crosses the plate in the second inning of a baseball game against the Toronto Blue Jays at Fenway Park, Thursday, Sept. 13, 2018, in Boston. (AP Photo/Elise Amendola)

Xander Bogaerts scored the go-ahead run on an eighth-inning error after the Blue Jays rallied in the top half with two runs to tie it 3-all.

Rafael Devers also homered for the major league-leading Red Sox (101-46), who pulled 10 1/2 games ahead of the idle New York Yankees and decreased their magic number to six for clinching a third straight division crown.

Boston is the only team in the majors that's already locked up a playoff berth.

Brandon Workman (5-0) faced one batter, ending Toronto's eighth-inning rally, and got the win. Craig Kimbrel earned his 40th save.

Gurriel's drive pulled Toronto to 3-2 in the eighth and the Blue Jays added another run after Justin Smoak walked with two outs and Kendrys Morales followed with a single. Joe Kelly hit Randal Grichuk with a pitch to load the bases, then plunked Kevin Pillar to force in the tying run.

Bogaerts stole third after hitting a one-out double in the eighth and scored when second baseman Yangveris Solarte dropped a popup in shallow right field.

Devers hit a solo homer to right with two outs in the sixth off Mark Leiter Jr., putting Boston up 3-1.

Smoak singled home Gurriel in the third, and Ian Kinsler had a sacrifice fly for Boston in the bottom half.

Sam Gaviglio pitched 3 1/3 innings for Toronto, allowing two earned runs and six hits with one walk and one strikeout.

Eduardo Rodriguez struck out seven over six innings for the Red Sox. Rodriguez retired the last nine batters he faced, striking out two in the sixth before Boston turned it over to the bullpen in the seventh. He allowed one run on five hits and didn't walk a batter.

Red Sox: 3B Eduardo Nunez left in the fourth with soreness in his right knee after hitting a leadoff double. Nunez, who tripped and stumbled over first base while running out a fielder's choice in the second, was replaced by Devers.

Blue Jays: RHP Marco Estrada (7-11, 5.32 ERA) starts for Toronto in the first of three games against the Yankees in New York.