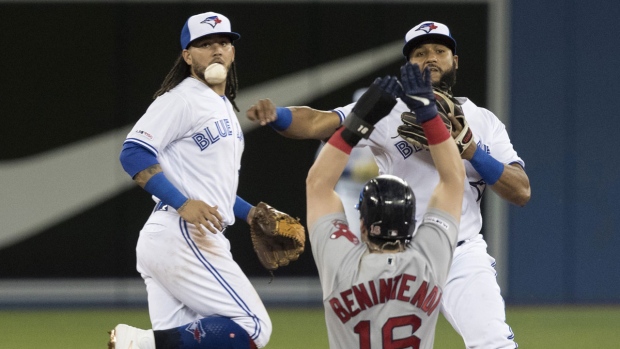 Boston Red Sox Andrew Benintendi is out on the force out at second base as Toronto Blue Jays second baseman Richard Urena tries to turn the double play and shortstop Freddy Galvis looks on during the third inning of their American League MLB baseball game in Toronto, Monday, May 20, 2019. THE CANADIAN PRESS/Fred Thornhill

Boston belted four home runs and 16 hits in a dominant 12-2 win at Rogers Centre on Monday afternoon. The Red Sox are now 19-9 in their last 28 games.

But in a curious decision, Blue Jays management decided to play in front of a large crowd of 26,784 without Guerrero, who during the game was named the American League player of the week.

The 20-year-old rookie has almost been as hot as the Red Sox. After going homerless in his first 13 games, he smacked four homers, batted .333 with nine RBIs in a six-game road trip with visits to play the San Francisco Giants and Chicago White Sox.

But because the Blue Jays are in the middle of 16 consecutive games without a day off, they planned out a schedule in which each of starting position player would be rested for at least one outing.

Guerrero's turn in the dugout came on Monday, even though manager Charlie Montoyo had the perfect opportunity to alter the plan. Second baseman and leadoff hitter Eric Sogard already was out with a sprained left thumb. He suffered the setback when he dove back into first base against the White Sox in a 5-2 win on Sunday.

But rather than keep Guerrero's hot bat in the lineup -- possibly even as the designated hitter -- Montoyo stuck with his plan to sit the rookie.

"We have the schedule set up for all the players because we're going to play 16 straight and that's why Vlad was off today," Montoyo said.

The Blue Jays manager didn't consider altering that plan with the Sogard injury. Montoya felt that it was important Guerrero take the day off, especially since he missed most of training camp with an oblique strain.

Guerrero found out when he stepped inside Toronto's clubhouse that he would be rested. If he was disappointed he didn't appear so in his post-game remarks.

"I think so, especially since I got hurt in spring training," he said through an interpreter when asked if he agreed with the decision. "It's just being careful."

He found out about his player of the week honours after the game.

"It was a great week," he said. "I'm just going to keep working hard to help the team win. I'm not focused on the awards, but if they come, they come."

The hits came early and often for the Red Sox in the opener of the four-game series in Toronto. After Blue Jays catcher Luke Maile smashed a two-run homer to left field in the second inning to tie the game at 2-2, the Red Sox took over for good with a four-run third inning against Toronto starter Edwin Jackson.

The big blow was infielder Michael Chavis' ninth homer of the year, a two-run shot to left field after shortstop Xander Bogaerts delivered a two-run single.

The Red Sox offensive display helped ease Boston starter David Price back into action after a recent bout with tendonitis in his left elbow.

The left-handed Price, who spent the final three months of the 2015 season with the Blue Jays, last pitched on May 2. He ran his streak to 9-0 in his last 11 starts against Toronto at Rogers Centre.

Notes: Toronto claimed 33-year-old right-handed reliever Javy Guerra off waivers from the Washington Nationals ... Blue Jays closer Ken Giles was unavailable because of a wrist injury … Montoyo confirmed Aaron Sanchez (3-4) will start for Toronto on Wednesday. He departed with a right middle-finger blister problem in the fourth inning of his last start in Chicago on Friday.