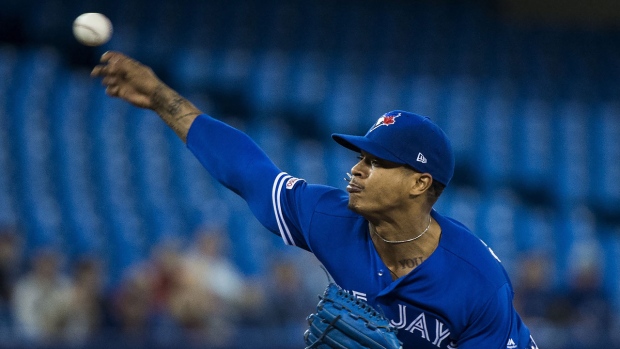 Stroman (1-6) went 6 1/3 innings, allowing eight hits and three earned runs and striking out four batters to earn a quality start for the Blue Jays. But his performance was marred by a lack of run support and he was left frustrated by the timing of the decision to remove him from the game in what turned into a 7-2 win for the Chicago White Sox.

"I'm never happy to be leaving the game. My teammates, my coaches, everybody knows that. I want to be the guy with the ball always," said Stroman (1-6). "The last thing I've ever had in my head when a coach or manager comes to get me is 'yes, I can't wait to get out of this game."'

With runners on first and third and one out in the seventh, Stroman exchanged words with Montoyo as the Blue Jays (16-23) manager headed to the mound. Stroman also appeared to have a heated discussion with pitching coach Pete Walker in the dugout as he finished the day with 97 pitches, 61 of them for strikes.

"I like it when pitchers get upset when I take them out. I don't want them to be happy or hear 'please take me out,"' Montoyo said about the reaction from Stroman.

"That's what I like about this group. Even the position players. When they aren't playing, they get mad at me. Which I love it. That's all good."

Stroman, never one to hide his emotion, was unapologetic about how he conducted himself and said that him and Montoyo worked it out before the game was complete.

"No, not at all," Stroman said when asked if he could have handled things differently. "It was a minor disagreement that I'm sure you guys (the media) will try to play into a bigger issue. But, like I said, me and Charlie spoke right after the inning and it was clear right then and there."

Toronto had just three hits and no runs when the Blue Jays pulled Stroman. Making his ninth appearance this season, Stroman has received a total of eight runs in support.

Yolmer Sanchez had a home run and had a pair of RBI's and Charlie Tilson also drove in two runs for the White Sox (17-21), who snapped a three-game losing streak.

The White Sox opened the scoring in the third inning when Sanchez unloaded on a 1-1 fastball over the left-field wall for a 1-0 lead. The struggles for Stroman would continue when Yoan Moncada hit an RBI single to make it 2-0. The runner, Leury Garcia, was able to score on the play after Stroman allowed him to reach third base on a failed pick-off attempt at first base.

Chicago added to its lead in the seventh frame. Nicky Delmonico hit an RBI single which made it 3-0 Chicago. That was the last batter Stroman would face before he was pulled in favour of relief pitcher Derek Law.

Immediately after the change, Sanchez would collect his second RBI when he'd attempt a safety squeeze. Law was unable to handle the bunt by Sanchez and Tilson scored for a 4-0 lead. Law was charged with an error on the play.

Toronto would respond later in the seventh when Randal Grichuk hit a solo homer to cut Chicago's lead to 4-1. It was Grichuk's team-leading seventh home run of the season.

In the eighth inning, Tilson hit a two-run double for a 6-1 Chicago lead.

In the ninth, James McCann hit a ground-rule double to put the White Sox up 7-1. Freddy Galvis had an RBI ground out later in the inning for the Jays.

NOTES: Vladimir Guerrero Jr. had the first multi-hit game of his career. He went 2 for 2 with a pair of singles and a pair of walks. During the game, the Blue Jays announced that they acquired right-handed pitcher Edwin Jackson from the Oakland Athletics in exchange for cash considerations.