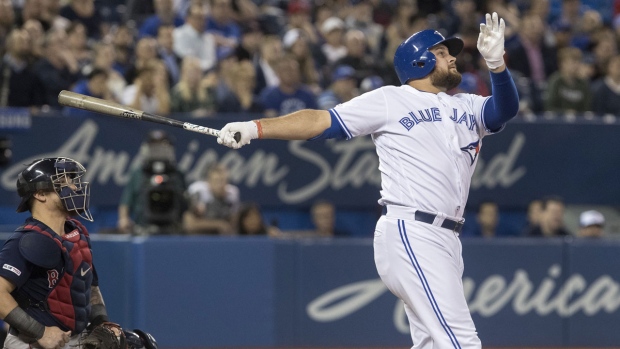 Toronto Blue Jays' Rowdy Tellez hits a three run home run against the Boston Red Sox in the fifth inning of their American League MLB baseball game in Toronto on Tuesday May 21, 2019. It was his second home run in the game. (THE CANADIAN PRESS/Fred Thornhill)

Stroman, who entered play with a major-league low average of 1.55 runs of support per nine innings -- worked into the seventh inning for his second win of the year.

It was the first career multi-homer game for Tellez. The Blue Jays, who outhit Boston 11-7, have won three of their last five games.

Stroman (2-6) worked a 1-2-3 first inning and did well to escape the next two frames. Xander Bogaerts reached third base in the second before Stroman got Christian Vasquez to hit a comebacker to retire the side.

The Red Sox loaded the bases in the third but the Toronto right-hander fanned Mitch Moreland and Bogaerts, punctuating the last strikeout with a shimmy-shake as he trotted to the dugout.