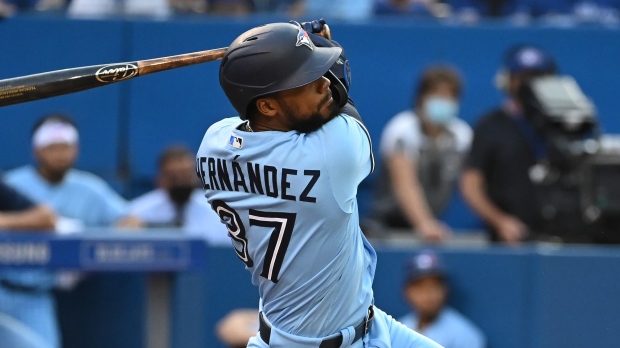 TORONTO - The wait to pitch in front of his new fanbase was worth it for Blue Jays lefty Hyun Jin Ryu.

Backed by a 12-hit attack in the Blue Jays' 7-2 victory against Cleveland on Tuesday, Ryu pitched an effective seven innings in his first home game in Toronto since the prized free-agent signed his four-year, US$80-million deal with the Canadian club back on Dec. 27, 2019.

The Covid-19 pandemic meant Ryu (11-5) made his previous home starts for the Blue Jays (55-49) in either Dunedin, Fla. or Buffalo. However, he enjoyed his new surroundings in Toronto. There was plenty of South Korean support among the 14,270 at Rogers Centre, including one fanatic who waved a South Korean flag near the Blue Jays dugout.

“To walk off with a win meant a lot to me,” the South Korean starter said through an interpreter. “The atmosphere to be back in Toronto has been good. I understand we lost (to Cleveland on Monday), but we were able to come back and win.”

The Blue Jays have won four of the five outings since their return.

There was some doubt as to whether Ryu would be extended to a seventh inning. He escaped a scary incident in the sixth when Cleveland's Bobby Bradley screamed a liner back at him. The Blue Jays pitcher managed to get his glove on the hard-hit ball. But the ball popped out for an infield hit.

“I feel I actually could have caught that,” Ryu said. “I still could have got him out if I could have located (the ball). It would have been nice to get the guy out.”

Ryu shook his right hand a few times and stayed in the game. He retired the next four batters in a row, three with strikeouts. Toronto manager Charlie Montoyo remarked it was an easy decision to allow Ryu to pitch the seventh, even though his pitch count hit 99.

“He was vintage Ryu,” Montoyo said. “He was hitting the corners, and his changeup was on.”

After Blue Jays centre fielder George Springer, named the American League player of the week on Monday, smacked his 41st career leadoff homer, all-star outfielder Teoscar Hernandez followed with a two-run blast. He worked Cleveland starter Zach Plesac deep into the count, clubbing a fastball to right field on the eighth pitch for his 17th of the season.

The Blue Jays restored their three-run advantage in the bottom half of the inning. Hernandez led off with a single to left, advanced to third on a double from Lourdes Gurriel Jr., to right field and scored on Breyvic Valera's groundout to second.

Toronto opened up the game in the fifth inning with two more runs. Springer led off with a double to left-centre, advanced to third on Marcus Semien's single to centre and scored on Bo Bichette's sacrifice fly.

Semien took second on the throw from Cleveland centre fielder Myles Straw's attempt to get Springer at the plate, and the Blue Jays second baseman scored on Hernandez's single to centre for his third RBI of the game.

With a sacrifice line out to left field, Springer knocked in Gurriel for the game's final run.

Before the game, Toronto placed infielder Cavan Biggio on the 10-day injured list with a back/neck-related ailment. In his place, outfielder Corey Dickerson was activated. He'd been out with a left foot injury since acquired in a trade with the Miami Marlins on June 29. He made his Blue Jays debut in the designated hitter's spot but went 0 for 4.

This report by The Canadian Press was first published August 3, 2021.