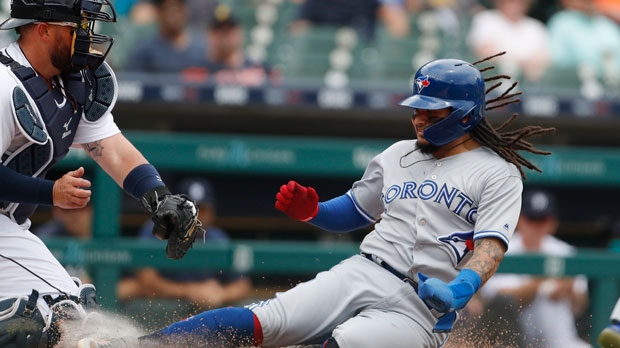 DETROIT -- Nicholas Castellanos led off the bottom of the 10th inning with a home run, and the Detroit Tigers snapped their six-game losing streak with a 4-3 victory over the Toronto Blue Jays on Sunday.

The Tigers won for only the eighth time in their last 41 games -- and this victory didn't come easily. Closer Shane Greene allowed a tying, two-run homer by Lourdes Gurriel Jr. in the ninth, but Castellanos connected on the first pitch thrown by Tim Mayza (0-1) for his 11th homer of the season.

Nick Ramirez (5-3) pitched a scoreless top of the 10th for Detroit.

Tyler Alexander pitched seven impressive innings and JaCoby Jones homered for the Tigers. Alexander held Toronto to a run and three hits, but his first career win slipped away in the ninth. Greene, who entered with a 1.03 ERA, allowed a drive to left-centre by Gurriel that tied the game at 3.

Toronto scored in the first on an RBI double by Gurriel, but Detroit tied it in the second when a run came home on Bobby Wilson's double-play grounder. The Blue Jays tried to turn a 5-4-3 triple play when Wilson hit a grounder to third with the bases loaded, but the throw to first was late.

Jeimer Candelario put Detroit up 2-1 with an RBI groundout in the third, and Jones hit his 10th homer of the year in the fifth.

The Tigers recalled the 25-year-old Alexander from Triple-A Toledo before the game. He did not allow a baserunner after the third inning and faced just three batters over the minimum through seven.

Tigers: Detroit has Monday off before two home games against Philadelphia. Matthew Boyd (6-8) takes the mound for the Tigers on Tuesday night against Aaron Nola (8-2).