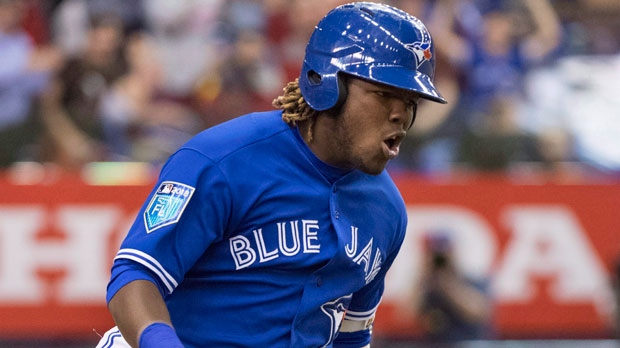 Toronto Blue Jays prospect Vladimir Guerrero Jr. has been named the winner of the Randall Echlin Award as the Canadian offensive minor-league player of the year.

In other awards announced Wednesday by Canadian Baseball Network, Jordan Romano of Markham, Ont., was named Canadian minor-league pitcher of the year.

Romano excelled with the Blue Jays' double-A New Hampshire Fisher Cats, going 11-8 with a 4.13 earned-run average in 25 starts. He also won his only start with the triple-A Buffalo.

In 142 1/3 combined minor-league innings, he struck out 128 batters and allowed just 126 hits. The six-foot-four right-hander finished first in wins and strikeouts among Canadian minor leaguers and was second in innings pitched. He was selected to pitch in the Eastern League All-Star Game and was named to the circuit's year-end All-Star team

Jamie Romak of London, Ont., was voted the top offensive hitter in foreign or independent ball after batting .319 with 40 home runs and 97 RBIs for the Korean Baseball Organization's SK Wyverns.

Andrew Albers of North Battleford, Sask., earned the top pitcher in foreign or independent ball honours, posting a 9-2 record and a 3.08 ERA in 19 games while striking out 83 in 114 innings in his first year with the Orix Buffaloes of the Japan Pacific League.