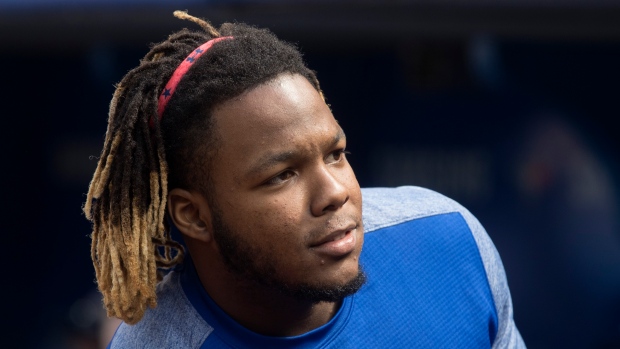 Toronto Blue Jays Vladimir Guerrero Jr. watches the game from the bench in the seventh inning of their American League MLB baseball game against the Seattle Mariners in Toronto Sunday August 18, 2019. THE CANADIAN PRESS/Fred Thornhill

TORONTO -- The Toronto Blue Jays will open their 2020 spring training schedule at their newly renovated Dunedin Stadium against the Atlanta Braves.

The Blue Jays began renovations on their longtime Grapefruit League home in Florida after this year's spring training ended.

The 31-game schedule, unveiled on Monday, does not include any games in Montreal, which has hosted Blue Jays exhibition games the past six years.

However, the Blue Jays say they are exploring options to play another pre-season series in Montreal next year.

The Blue Jays have open dates on the final two days of their spring-training schedule on March 23-24, traditionally when the games are held at Montreal's Olympic Stadium