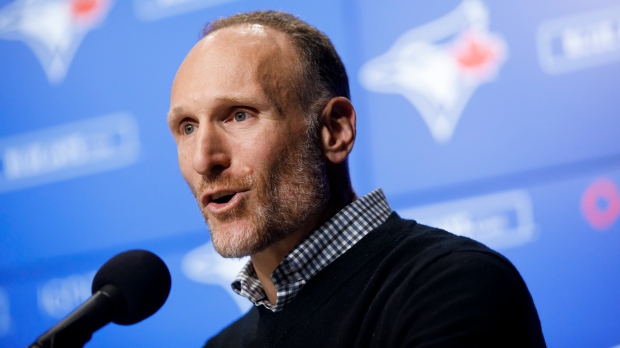 TORONTO - The Toronto Blue Jays remained stuck in a holding pattern Friday, awaiting word on whether they'll get the go-ahead from government officials to train and play at the Rogers Centre or be forced to shift focus to a likely homebase at the team's Dunedin spring-training facility in the COVID-19-ravaged state of Florida.

With training camp scheduled to start Wednesday and a 60-game Major League Baseball regular season to begin July 23 or 24, president Mark Shapiro acknowledged Friday that the clock is ticking.

“There is no deadline from MLB and there's no deadline from any other governing body,” he said on a conference call. “But I think for myself and for the Toronto Blue Jays, we are obviously working on an accelerated timeframe and we need to make a decision very soon.

“I can't give you when that is because I'm processing information even around this call, and so it'll be largely just based on the continued dialogue and feedback we receive from public health.”

Most teams are expected to play in their home stadiums, but the Blue Jays face an additional hurdle because of border and quarantine rules during the pandemic.

“Sometime over the weekend, we'll get them on their way and tell them where to report,” Shapiro said.

The Blue Jays had to petition the federal government to let players cross the closed U.S.-Canada border to safely prepare for the upcoming season. Anyone entering Canada for non-essential reasons must quarantine for 14 days and the border remains closed to non-essential travel until at least July 21.

“As the condition in Florida got worse and the spike happened ... we raised the possibility of conducting our training in Toronto,” Shapiro said. “It just seemed like that was a safer alternative.”

The Public Health Agency of Canada said it is currently “assessing” a restart plan from MLB. When asked Friday for a timeline on a decision, an agency spokesperson said via email that “no further information” was available.

“Protecting the health and well-being of Ontarians continues to be our No. 1 priority,” Lisa MacLeod, Ontario's Heritage, Sport, Tourism and Culture Minister, said in an emailed statement. “As we continue the safe and gradual reopening of our economy, our government is working closely with professional sport teams and organizations, as well as local and federal levels of government and our public health experts on what a safe return to play looks like.”

Another concern is that multiple players and staff members have tested positive for COVID-19. Reports of the positive cases first surfaced Wednesday but Shapiro declined to offer specifics on numbers.

The Blue Jays shut down their spring training complex last week after a player presented symptoms consistent with the virus. Personnel at the facility underwent testing per protocols established by the Jays' medical team and MLB.

Shapiro said that he would “expect a large number of positive tests” as more testing is done over the next week as players and staffers report to camp.

“That's going to be part of the transition process into creating the closed environment as much as possible around our players,” he said.

The NHL and NBA are also planning to return next month. Hockey is planning to use two “hub cities” for games while all basketball games will be played at a large complex near Orlando.

Baseball is using a different approach as teams will still have to travel for road games. While not finalized, teams will likely play 40 games against divisional opponents and 20 interleague games against clubs from the same region.

There has been a significant uptick in COVID-19 cases throughout parts of the United States this month, including eyebrow-raising numbers coming out of Florida. Health officials there reported nearly 9,000 new cases on Friday, five times more than where the state record stood two weeks ago.

Ontario, meanwhile, has made significant strides on the COVID-19 front of late. A total of 111 new cases was reported in the province on Friday.

Shapiro said the Blue Jays have not considered Buffalo, home of the triple-A affiliate Bisons, as a potential training or home location although he added that taxi squad players could work out there. Sahlen Field is about a two-hour drive from the Ontario capital.

He also said a prospective plan to share Tropicana Field in St. Petersburg, Fla., with the Rays was scrapped about three weeks ago. That plan would have required the Blue Jays to finance and build an additional locker-room at Tampa Bay's home stadium.

Shapiro also said the Blue Jays will continue paying their minor-league players, even though they're not currently able to play games.

“We're committing to paying minor-league players at the same rate through Sept. 7,” he said.

- With files from The Associated Press and Canadian Press reporter Allison Jones.