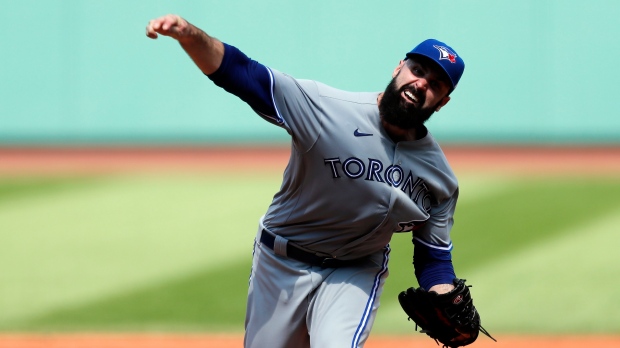 Toronto Blue Jays' Matt Shoemaker pitches during the third inning of a baseball game against the Boston Red Sox, in Boston on August 9, 2020. The Toronto Blue Jays will send Matt Shoemaker to the mound for Game 1 of their wild-card series against the Tampa Bay Rays. Blake Snell will start for Tampa Bay in the opener of the best-of-three series on Tuesday at Tropicana Field. THE CANADIAN PRESS/AP, Michael Dwyer

ST. PETERSBURG, Fla. - The Toronto Blue Jays are breaking away from baseball tradition as they gear up for their first playoff game in four years on Tuesday.

The Blue Jays are saving Hyun-Jin Ryu for Game 2, opting to give their ace an extra day of rest. If Game 3 is required, Toronto plans to go with Taijuan Walker, the team's second most effective starter in recent weeks.

Blue Jays manager Charlie Montoyo says his team needs to be creative to upset the Rays, who lost to Houston in the American League Division Series last year.

Toronto grabbed the eighth and final American League playoff spot in the expanded post-season by finishing with a record of 32-28 in the COVID-19-shortened season.

Tampa ran away with the AL East title with a record of 40-20.