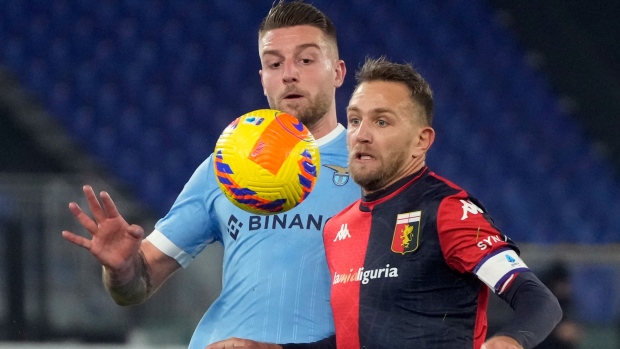 “Mimmo is a versatile defender who is a very good passer and a smart player,” Bob Bradley, Toronto's head coach and sporting director, said in a statement. “He can play as a left back or a centre back and should be an excellent role model for our young players.”

Like Insigne, Criscito is a native of Naples. But Genoa became his home - he met his wife and started a family there. Their children speak Italian, Russian and English.

TFC was left short at fullback this season after the departure of Brazil's Auro and Canadian Richie Laryea and retirement of Justin Morrow.

All four have shown promise in the demanding role of fullback/wingback, especially in the offensive end. But defensively there have been growing pains.

Toronto (5-8-3) ranks 27th in the 28-team league in goals conceded, giving up 1.88 goals a game. Toronto fullbacks racing towards their own goal in a bid to get back in position has been a common sight this season.

“Mimmo is a player who will add valuable veteran presence to our team,” Toronto president Bill Manning said. “He has played in a number of important games for his club and country in his career, has been a captain at Genoa, and we're excited he will be joining our club.”

Criscito showed his resolve in May when he fired home an injury-time penalty to give Genoa a 2-1 win over Juventus. However, he could not save Genoa, a team that has gone through a string of managers in recent years, from relegation for the first time in 15 years.

Criscito has represented Italy at youth and senior levels, including the 2008 Summer Olympics. He made his senior debut in 2009 and went on to make 26 appearances through 2018. He was a member of Italy's 2010 World Cup team.

Criscito began his pro career with Genoa, debuting at 16 in Serie B in 2003. He joined Juventus in 2004, making nine appearances before returning on loan to Genoa. He moved to Russia in 2011 to play for Zenit Saint Petersburg, returning to Genoa in 2018.

Criscito made a combined 498 appearances over the last 15 years with Genoa and Zenit, scoring 50 goals in Serie A, Russian Premier League, UEFA Champions League and Europa League play.

The Italian wore No. 4 with Zenit and Genoa, in his most recent stint. That number belongs to captain Michael Bradley in Toronto.