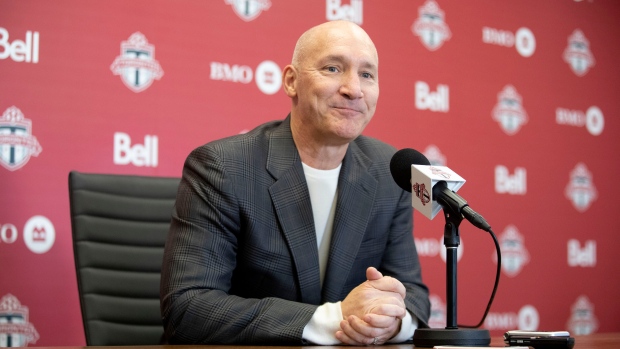 Toronto FC president Bill Manning speaks to the media during an end-of-season availability in Toronto on Wednesday, November 13, 2019. THE CANADIAN PRESS/Chris Young

TORONTO - Bill Manning, president of both Toronto FC and the Toronto Argonauts, has been rewarded with a five-year contract extension that runs through the 2025 Major League Soccer and Canadian Football League seasons.

Manning's existing deal expired at the end of 2020, a TFC spokesman confirmed.

The 55-year-old Manning joined Maple Leaf Sports and Entertainment as TFC president in October 2015. He added the title of Argonauts president in January 2018 when MLSE acquired the CFL franchise.

“Bill has brought invaluable experience to MLSE as president of TFC and the Argos, but more importantly, he has had an important hand in creating a company culture focused on winning and giving back to our community,” MLSE chairman Larry Tanenbaum said in a statement.

“As president of Toronto FC and the Argonauts, Bill's wealth of experience and many accomplishments have helped shape our leagues for the better and his impact within our company is just as important,” added MLSE president and CEO Michael Friisdahl.

“When I joined MLSE six years ago as TFC president, I stressed the importance of stability and continuity to achieve our goal of a championship, and we achieved that goal in 2017,” Manning said in a statement.

“Today I am thankful to MLSE and our ownership group for their belief in me and I am so appreciative of all the talented staff members and great players who have worked with me here in Toronto. We will continue to fill the TFC trophy case, and I look forward to lifting the Grey Cup soon with (GM) Michael Clemons and (head coach) Ryan Dinwiddie. I'm grateful to the fans of both TFC and the Argos for welcoming me and my family to this special city and for all of their support.”

Perhaps Manning's best move since coming on board at Toronto FC was not firing then-coach Greg Vanney when he took over. Vanney, who was named the ninth head coach in club history in August 2014, went on to lead TFC to its greatest triumphs before stepping down in December. Chris Armas succeeded Vanney, who now is in charge of the Los Angeles Galaxy.

Turning the Argonauts around has been more difficult, on and off the field. Head coaches Marc Trestman and Corey Chamblin and GM Jim Popp were axed on Manning's watch with the team enduring 4-14-0 seasons in both 2018 and '19.

The 2020 CFL season was cancelled due to the pandemic and the league is now exploring possible options with the XFL.

Manning now does have his hand-picked lieutenants in place at the Argos with Clemons as GM and Dinwiddie as head coach.

Manning is a two-time MLS Executive of the Year, earning the honour in 2012 and '14 during his time with Real Salt Lake.

Manning got his start in MLS in 2000 as president and GM of the Tampa Bay Mutiny.

He went on to work for the NBA's Houston Rockets (2003-04) and NFL's Philadelphia Eagles (2004-08). He became president of Real Salt Lake and Rio Tinto Stadium in 2008, leaving the club in August 2015 in what was described as a mutual parting of the ways as part of a front-office restructuring.

A native of Massapequa, N.Y., Manning earned first-team All-America honours as a senior at the University of Bridgeport. He played professionally in the United Soccer League (USL) with the Penn-Jersey Spirit (1991), the Valley Golden Eagles (1993) and New York Fever (1994-95) before moving into front-office roles with the Long Island Rough Riders and Minnesota Thunder, in the USL.

This report by The Canadian Press was first published March 18, 2021