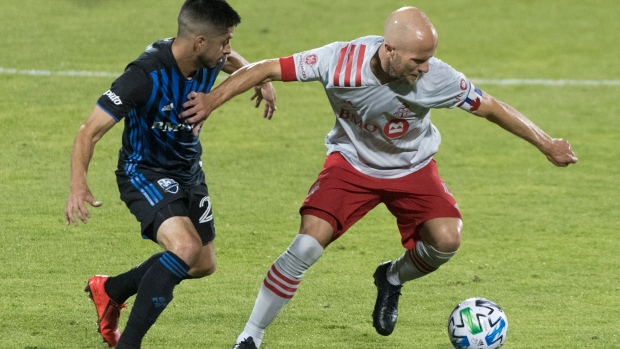 Montreal Impact's Emanuel Maciel, left, challenges Toronto FC's Michael Bradley during second half MLS soccer action in Montreal, Friday, August 28, 2020. Toronto FC prepares to head west to face the Vancouver Whitecaps on the weekend with a question-mark over captain Michael Bradley, the victim of a nasty tackle in the dying moments of Tuesday's loss to visiting Montreal. THE CANADIAN PRESS/Graham Hughes

Coach Greg Vanney said an MRI showed that the 33-year-old midfielder has a Grade 2 sprain of the medial collateral ligament.

“Timeline-wise it's weeks, it's not months,” Vanney told reporters Thursday. “We'll see just how he progresses, I guess. He'll be out for a little while.”

Bradley was felled late in second-half stoppage time by Impact midfielder Emanuel Maciel, whose red card was downgraded to a yellow on video review. Bradley, not one to make a meal of injuries, spent a good time on the ground before limping off and did not return.

Vanney said the explanation for changing the card was that Maciel's challenge was not studs-up.

“Still a dangerous tackle,” Vanney argued. “You can still break somebody's leg if you go into them shin-high with your knee or with another part (of your body).”

Bradley, who marked his 200th career MLS regular-season game last time out, has been ever-present in the starting 11 since joining Toronto in January 2014. He had off-season surgery after injuring his ankle in the MLS Cup final loss in Seattle last November, but only missed two games due to the schedule hiatus caused by the pandemic.

Vanney's team opened the rejigged all-Canadian portion of its schedule with a pair of home wins over the Whitecaps - 3-0 and 1-0 on Aug. 18 and 21, respectively.

Toronto had a chance to tie Tuesday's game against Montreal in first-half stoppage time but Spanish midfielder Alejandro Pozuelo, normally a lock on spot kicks, flubbed a penalty attempt. Instead of going for goal, he nudged the ball to his right and an onrushing Pablo Piatti knocked it on.

The goal was waved off for encroachment, however.

“We've all addressed it and it's behind us,” he added.

Tuesday's loss to the Impact ended Toronto's 18-game unbeaten run in regular-season play - one short of the league mark. Columbus (6-1-2) vaulted over TFC to move into first place in the league after its 1-0 win over Philadelphia on Wednesday.

The Whitecaps are second-last in the league, with only expansion Inter Miami (1-6-1) on fewer points.

After Vancouver, Toronto wraps up its Canadian leg with a game Wednesday in Montreal.

The winner of the current Canadian round-robin advances to the Canadian Championship final against the CPL champion from the Island Games. Vancouver, which has lost all three of its games in the mini-competition so far, needs a victory Saturday to keep its slim hopes alive.

Vanney said details are still fuzzy on what's next in the schedule. Travel and other restrictions due to the pandemic may force the Canadian teams to make a temporary home south of the border.

“We have some dates ... of when next-phase games might start for us. Locations, I think, are getting closer to being finalized,” he said.