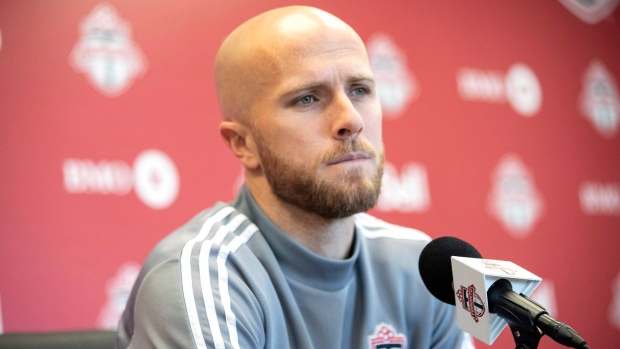 In this Nov. 13, 2019, file photo, Toronto FC MLS soccer player Michael Bradley speaks to the media during an end of season availability in Toronto. Toronto FC captain Michael Bradley pulled no punches Thursday, lamenting the "zero leadership" south of the border as the U.S. is ravaged by racial unrest. THE CANADIAN PRESS/Chris Young

Toronto FC captain Michael Bradley pulled no punches Thursday, lamenting the “zero leadership” south of the border as the U.S. is ravaged by racial unrest.

“We have a president who is completely empty. There isn't a moral bone in his body,” Bradley told a media conference call.

Bradley urged his fellow Americans to speak with their ballot in November, saying it was “impossible to overstate” the importance of the coming election.

“We need as many people as possible to understand that at a real level, to think about what four more years with Trump as president, what that would mean, how terrible that would be for so many people.”

Referencing racial inequality and social injustice, Bradley added: “If we want any chance to start to fix those things, then Trump can't be president, it's as simple as that.”

The 32-year-old Bradley has run through the gamut of emotions while watching the violence and unrest unfold in the wake of the death of George Floyd in Minneapolis while three police officers restrained him - one with his knee on Floyd's neck.

“I'm angry, I'm horrified, I'm sad and I'm determined to do anything and everything I can to try to be a part of the fix,” he said. “Because it has to end. And we all have to be part of that fix.”

He acknowledged that while he has much to learn on the issues, politicians, policy-makers and businesses have to be held accountable.

“My man Mike is a as real as they come. Nothing but the truth here,” teammate Joze Altidore tweeted.

Bradley has criticized Trump before. In January 2017, he said he was “sad and embarrassed” by Trump's travel ban aimed at citizens of predominantly Muslim countries.

The TFC captain, while happy to see the MLS labour impasse over, noted there had been “some real difficult moments along the way.” That included a threat of a lockout from the league.

Such tactics “did not sit well with the players,” he said.

He also said there had been a frustrating absence of dialogue right from the beginning of talks, which he acknowledged played out against an unprecedented global threat.

“This, at a certain point for me, was about what's right and what's wrong in the middle of the pandemic. And the way to treat people and the way that you look after people. I kept coming back to that idea. That we have all put so much into growing the game in North America, at all levels - ownership, league office, executives coaches, players, fans.

“Everybody is important to what we're trying to do. To try to dismiss any of the entities that I just named would be short-sighted and disrespectful because the game is about everybody.”

He said he would have loved to have seen everyone get on the same page early on and find a way “to cut through the (bull).”

“To just say 'This is where we are right now. Nobody has a playbook. Nobody has any answers but how are we going to come out better and stronger from all of this? ... I think conversations would have carried so much more weight and I think we would have been able to avoid so much of the way certain things played out.”

Bradley underwent ankle surgery in January to repair an injury suffered in the MLS Cup final loss in Seattle on Nov 10. His rehab over, he was part of a small group training session Thursday.

“I'm doing well,” he said. “I'm continuing to make progress ... At this point physically I feel really good. My ankle feels really good. And now it's just about training. Getting back into real training in a way that now prepares me for games.”

Still, he said injuries are an issue in the league's return to play given the time that has passed since the league suspended play March 12.

“That is a big concern,” he said. “And it's not a big concern only amongst players. I know that has been a real topic amongst coaches and sports science staff and medical staff.”

While teams will do everything possible to get the players ready, a compressed schedule at the Florida tournament that awaits teams won't help injury fears, he said.

“That certainly is a big question. Maybe the biggest question when you get past the initial health and safety stuff of COVID, among players and coaches and technical staff,” he said.

“How are we going to give ourselves the best chance to win, but also do it in a way where guys are at their highest level both technically and physically”