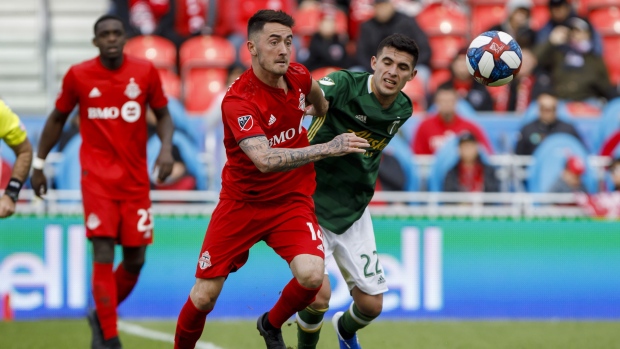 The 25-year-old Chapman signed as a homegrown player in January 2015 after two years with the Toronto FC academy.

The Michigan State product made 79 league appearances (28 starts) for Toronto's first team over five seasons with six goals and five assists. But he has been a forgotten man in recent months, only seeing 45 minutes of league action since the start of July.

“Jay has been part of the club for a long time and we are wishing him nothing but the very best in his next endeavour,” Toronto GM Ali Curtis said in a statement. “Having signed a homegrown contract in 2015, Jay has been part of teams over the years that have won a lot for the club.

“While we believe the trade is good for TFC, it presents a solid opportunity for Jay to start a new chapter in his life and playing career. Jay will be missed but having been with both our academy and first team, he will always be part of the TFC family.”

You will always be part of the TFC family, @jaychappers!

Chapman, who made 88 Toronto appearances in all competitions, bypassed the MLS SuperDraft in signing as a homegrown player.

“We think he would be a top-five player if he was in the draft,” then-GM Tim Bezbatchenko said at the time.

In 2014, the native of Campbellford, Ont., became the first Spartan to be named a semifinalist for the Missouri Athletic Club's Hermann Trophy awarded annually to the top NCAA player. He was also the first Michigan State player to be named Big Ten Midfielder of the Year.

“It's been a dream to play for my hometown and I look forward to coming back and seeing you all again,” Chapman said in a social media posting.

He joins fellow Canadian David Norman Jr. on the Miami roster, which is still being stocked ahead of its 2020 MLS launch.