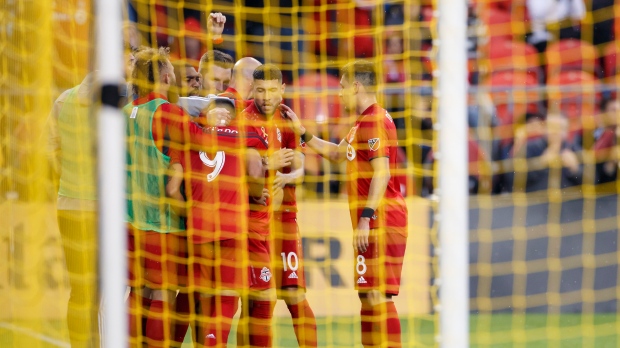 Toronto FC midfielder Jonathan Osorio (21), second from right, celebrates a goal with teammates during the second half of MLS action against the Colorado Rapids at BMO Field in Toronto, Sunday, Sept. 15 2019. THE CANADIAN PRESS/Cole Burston

Toronto led 2-0 after just 13 minutes, only to see the resilient Rapids pull even just after the hour mark. Then Osorio and Erickson Gallardo made their presence felt off the bench.

After a Colorado attack fizzled out, Toronto moved back up the field quickly with the speedy Gallardo attacking the penalty box before sending the ball over to Osorio, who right-footed it home for a 3-2 lead.

Toronto's Jozy Altidore, who had a fine game, hit the crossbar in the 89th minute as the match ended with the home side pressing.

Fraser, a former Toronto assistant coach, had won three straight since taking charge of the Rapids on Aug. 25.

The win extended Toronto's undefeated streak to nine games (5-0-4) in all competitions. Its last loss was Aug. 3 when it was beaten 2-0 at the New York Red Bulls.

Colorado pulled even in the 62nd minute when Nicholson's looping cross from well outside the box bounced in. Toronto goalkeeper Quentin Westberg was unable to come out for the well-placed ball as striker Diego Rubio slid towards it.

Toronto (12-10-9) dominated the early going and looked en route to a comfortable win, moving the ball quickly and repeatedly pulling the visitors out of shape. But Colorado (10-15-6) clawed its way back and could have gone in tied 2-2 at the half had Westberg not stopped a Kei Kamara penalty in the 39th minute.

Toronto went into weekend play in fourth place in the East, which means home-field advantage in the first round, and remained there with the win. It got some help elsewhere with New England tying Orlando and Montreal losing to FC Cincinnati. D.C. United won at Portland to remain tied in points with Toronto at 45 and currently sit fifth in the East.

Fraser exchanged handshakes and hugs with Toronto officials and players prior to the match.

It was also a return home for Colorado goalkeeper Clint Irwin, a former Toronto No. 1 who was traded to the Rapids last December after three seasons with TFC. Irwin continues to deputize for Tim Howard (hamstring).

Endoh opened the scoring in the eighth minute, angling his shot off the crossbar after a slick buildup between Richie Laryea and Altidore.

Pozuelo then made it 2-0 from the penalty spot in the 13th minute after defender Lalas Abubakar was caught with a handful of Altidore's jersey. After video review to see if a red card was warranted (Abubakar was instead yellow-carded), Pozuelo sent a looping penalty down the centre as Irwin dove to a side.

Irwin made a fine one-handed save in the 18th minute to deny a Nicolas Benezet shot from the edge of the penalty box.

Colorado pulled one back in the 31st minute after Nicholson raked a low ball across the box. The ball bounced off Michael Bradley and Rosenberry, from close range, drove it between Westberg's legs.

Westberg stopped Kamara's poorly-placed penalty in the 39th minute. It was redemption for the French-American 'keeper, who had chopped down Nicholson after a long Colorado ball found the Scottish winger behind the defence.

Osorio, who replaced the injured Benezet in the 40th minute, came close just before the half but was stymied by a last-ditch Colorado challenge.

Tempers flared in the 59th minute when Altidore was cautioned for a shoulder charge on Abubakar as the Ghanaian defender went for a ball in the air.

A fine reflex save by Westberg prevented the Rapids from pulling ahead in the 68th minute.

Toronto thought it deserved a penalty after going ahead 3-2 when Laryea went down in the box, but referee Chris Chilowicz did not buy it.

Toronto raised its home record to 8-1-1 against the Rapids, who have not won at BMO Field since 2014. Colorado did win the 2010 MLS Cup here, however.

Kamara (Sierra Leone) and Rubio (Chile) returned to the Colorado attack after international duty. But English midfielder Jack Price, a maestro at set pieces, was suspended due to yellow card accumulation.

Toronto plays at Montreal on Wednesday in the opening leg of the Canadian Championship final.