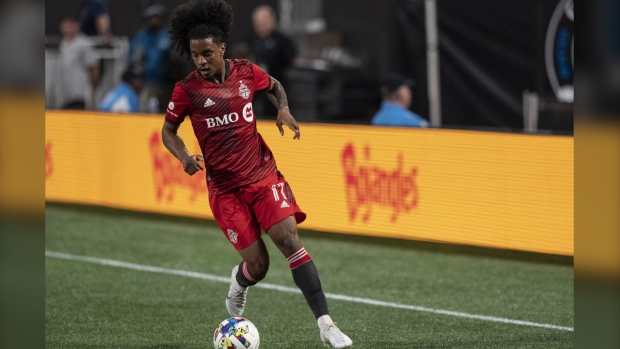 With the Major League Soccer playoffs out of sight and the season near its close, Toronto FC is looking to finish on the right foot when they host post-season hopeful Inter Miami CF on Friday.

Toronto (9-16-7) is eliminated from post-season contention for the second year in a row while Miami (12-13-6) sits in the seventh and final playoff spot in the Eastern Conference.

Heading into their final home game of the season and with just two games remaining, TFC is focused on improvement.

“(It’s about) trying to build on what we’ve been working on and just trying to do it better,” said forward Jayden Nelson. “It’s more looking towards the next season than now, so we’re just building … trying to work hard and get better.”

It’s been a difficult stretch for the Reds of late. The team has not won a game since they defeated Charlotte on Aug. 27 and have been plagued by goalkeeping and defending issues.

Toronto has allowed four goals in each of its last three games.

The Reds had a run of success after the arrival of Italian players Lorenzo Insigne and Federico Bernardeschi in late July. The two international stars quickly made their mark, leading Toronto on a five-game unbeaten streak that was halted by a 2-1 loss at the hands of Miami on Aug. 20.

TFC has won just one game since the end of that streak, and the run of poor form has seen them fall out of playoff contention in the process.

However, with no MLS play last week due to a brief period of international play, Toronto got the opportunity for a quick press of the reset button.

“I’d say (the break) came at kind of a perfect time,” Nelson said after Wednesday’s practice. “Obviously we’ve been disappointed with the results we’ve been getting, and we had big … expectations (for) the second half of the season, and I don’t think we’ve followed through with that.”

“Just having that little break let us regroup and just come back stronger for the Miami game.”

Miami, meanwhile, will enter BMO Field on a two-game winning streak. Head coach Phil Neville’s squad is currently sitting at 42 points in 31 games — identical to the eighth-place Columbus Crew (9-7-15), who they hold the tiebreaker over with three more wins.

A victory in Toronto will be vital for a Miami side that has gone just 3-10-3 on the road this season and is looking to strengthen its hold on the final playoff spot.

Friday will also be midfielder Alejandro Pozuelo’s first game back in Toronto since he was traded to Miami in July. The Spanish star, who was the MLS MVP in 2020 with Toronto, has scored two goals in 11 games so far this season for his new squad.

Despite the season not going the way TFC had hoped it would, especially after Insigne and Bernardeschi's arrivals, their final home outing still serves as an opportunity for the players to give the fans one more home win.

“Every time we step on the field we want to win, and doing it in front of our fans we obviously want to get three points in front of them,” said Nelson. “Especially at the last (home) game of the season.”