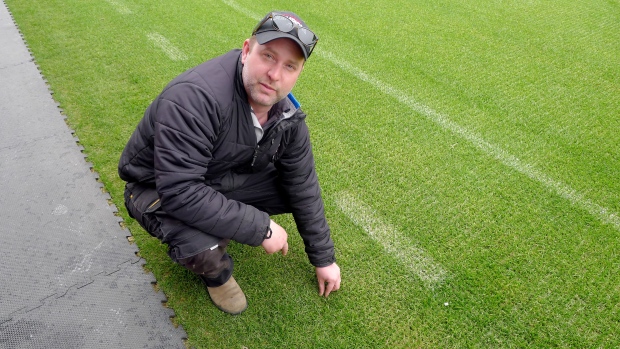 Robert Heggie, director of grounds for Toronto FC, points to the BMO Field grass which is having artificial fibres stitched in for a stronger hybrid playing surface in Toronto on Thursday, April 11, 2019. While Major League Soccer has been on hiatus since March 12 because of the global pandemic, Robert Heggie has been hard at it. The Toronto FC groundskeeper and a skeleton crew have been laying the groundwork for a perfect pitch for whenever the sport resumes. THE CANADIAN PRESS/Neil Davidson

TORONTO - While Major League Soccer has been on hiatus since March 12 because of the global pandemic, Robert Heggie has been hard at work.

Toronto FC's director of groundskeeping and a skeleton crew have been laying the groundwork for whenever the sport resumes. Heggie already likes what he sees at BMO Field despite some up-and-down spring weather.

“I'm very, very, very happy with the pitch right now,” he said in an interview.

Still, his part-time staff was temporarily laid off, leaving Heggie's crew at four including himself to look after BMO Field and the club's north Toronto training facility.

“We might not have been doing everything we would have been doing if we had a full staff,” he said. “But we were allowed to mow, fertilize, water - the bare minimum to keep the field at bay because you can't just walk away from natural grass, obviously.”

While they have not been able to have the BMO Field pitch at “game-day standards,” Heggie says they have kept the grass at a point “that we can bring it back to that standard when we need to.”

With Ontario relaxing its lockdown, Heggie was able to bring back three part-timers earlier this month.

“So we can starting kind of doing what we did before but in the new world instead - with a little bit more spacing and all of that. But groundskeeping and landscaping, it's an individual game anyway. You're not in close quarters with anybody and you're outside almost by yourself most of the time.”

Toronto had played one home game, a 1-0 win over New York City FC on March 7, when the league suspended play.

“What I saw out of it and what I heard from the team was they were impressed with (the pitch) for the first game,” said Heggie, named Sports Turf Manager of the Year in Canada in 2015.

“The grass has to be able to withstand that,” he said.

With more help available, Heggie has been able to used grow-lights and a cover when the weather turns cold.

But for the last two months, he has been conservative in his approach - not knowing if authorities might suddenly tighten the lockdown.

“And then I'm not here ... And you're leaving a plant that you don't really want to leave.”

“It was very weird to navigate through,” he added. “As any industry will tell you.”

Heggie has had help, with John Adach, Tyler Swain and Alex Vasiloff helping maintain BMO Field and the training ground.

It's the first spring with the new hybrid pitch at BMO Field. In April 2019, a crew from Dutch-based SISGrass inserted green polyethylene fibres into the ground every 20 millimetres. The made-in-Abu-Dhabi fibres are 20 centimetres long and stitched 18 centimetres deep into the ground.

It took 22 pallets, each weighing 448 kilograms and carrying 64 rolls of the artificial fibre.

The procedure left some five per cent of the surface artificial with the roots of the real grass attaching to the fibres. The hybrid surface delivers a firmer, truer, more consistent playing surface - to the delight of TFC players.

Prior to that, Heggie and his staff were used to working in isolation with the training facility a ghost town. They rarely saw anyone. Captain Michael Bradley and Argentine newcomer Pablo Piatti were allowed to go to the facility but did their injury rehab indoors

Then one day, Bradley got approval to go outside for a run.

“We looked over and it just felt bizarre to even see a human being out there,” Heggie said.

Once the green light is given to play, Heggie's to-do list will include upping the fertilizer regimen, taking water away, making the roots grow a little deeper.

The grass will have to be cut shorter and rolled to improve its playability.

Of course, that may not happen for a while. And when play does resume, it may not be in Toronto. The 26-team league reportedly is looking at playing games out of a central hub, with the Orlando area cited as one possible venue.

Away from work, Heggie and his wife have been busy with daughter Maisie. They celebrated her first birthday April 29, a day Heggie was originally due to spend at BMO Field with Toronto slated to host the New England Revolution.