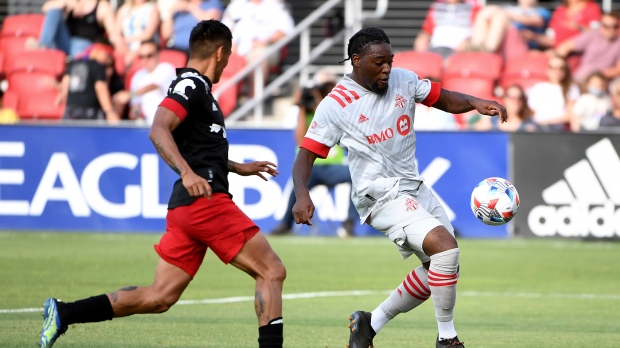 Toronto FC's Ayo Akinola, right, shoots and scores in front of D.C. United's Andy Najar during the first half of an MLS soccer match Saturday, July 3, 2021, in Washington. (Will Newton/The Washington Post via AP)

Toronto FC continues a busy week against good opposition when it visits the Philadelphia Union on Wednesday.

Both teams have work to do on a short turnaround, having each played at home Sunday. Toronto tied Nashville SC 1-1 and Philadelphia drew the Chicago Fire 1-1.

Toronto (3-8-5) is unbeaten in five games (2-0-3) since Javier Perez took over as interim coach on July 4 in the wake of a six-game losing streak that cost first-year coach Chris Armas his job. The Spaniard has stopped the rot but now has to help his team turn ties into wins.

Perez has drawn praise -- defender Eriq Zavaleta says he has similarities in style to former coach Greg Vanney -- but 10th-place Toronto is eight points out of a playoff spot and needs to close the gap.

"He's done a good job of preparing us for the games ahead and understanding what the game needs in the moment and what we need to get results," said Zavaleta. "And obviously, you've seen that our results have turned the tide a bit with him.

"He knows and we all know we need to continue to accumulate more points."

Fifth-place Philadelphia (6-4-7) is in a playoff position and sits some 11 points ahead of Toronto, having played one more game.

Against 10-man Chicago on the weekend, the Union recorded 25 shots but only four on target.

"Any time we don't take three points in Subaru Park, that's the emptiness that I talk about," said Philadelphia head coach Jim Curtin. "So we have to get back to taking all three points at home, That's the recipe for success in this league. And we're looking to get back on track against Toronto."

Philadelphia has not been firing on all cylinders, conceding at least one goal in its last seven matches after keeping five clean sheets in its previous seven games.

The Union has scored just six goals in its last six games. During that time, it has registered 84 shots, with just 29 on target.

"Now it becomes about executing and finishing off those chances," said Curtin. "I have a strong belief in this group that once that goal does goes in, I think the floodgates can open for us. But often times it's a situation where you create your own luck. And we'll continue to push in the right way against a good Toronto squad that's 2-0-3 in its last games."

Philadelphia's game earlier this season was based on clean sheets and getting an early lead, then looking to add to that advantage on the counterattack. Curtin's belief is attacking football starts with good team defence but in four of its last seven games, Philadelphia has conceded first.

With the secondary transfer window closing Thursday, moves are being made.

Midfielder Jamiro Monteiro, one of Philadelphia's designated players, appears on the way out. Curtin said the Dutch-born Cape Verde international is not with the team as transfer talks continue.

The Union announced the signing last week of midfielder Jesus Bueno but the 22-year-old Venezuelan has not yet arrived.

Toronto GM Ali Curtis says he will "be in conversations" until the transfer window closes. While the salary cap is an issue, Curtis has proved adept at finding ways to make things happen. If the club does make a move, it will likely come Thursday.

Toronto and Philadelphia last met Oct. 24, 2020, when the Union blanked Toronto 5-0 thanks to a Sergio Santos hat trick. Toronto went on to lose three of its four remaining matches, including a 1-0 playoff defeat at the hands of Nashville.

But winger Yeferson Soteldo is healthy and in fine form. The Venezuelan has scored or assisted on six of Toronto FC's last eight goals (two goals, four assists).

Santos returns for Philadelphia after serving a one-game suspension "for violating the league's policy regarding throwing/kicking an object toward fans" in the July 22 game against Orlando.

Philadelphia has big matches looming, with a game at league-leading New England on Sunday before heading to Mexico to play Club America in the first leg of the Scotiabank CONCACAF Champions League semifinal on Aug. 12.

HISTORY: Philadelphia has won two of its last three games (2-1-0) against Toronto after going winless in the previous 11 matches (0-9-2) including the playoffs.

CAUTION: Toronto captain Michael Bradley is one yellow card away from a suspension.

SCORING BY COMMITTEE: Fifteen different TFC players have scored this year, with 11 on one goal. Ayo Akinola, out for the season with a knee injury sustained at the Gold Cup, and midfielder Jonathan Osorio lead the team with three goals apiece.