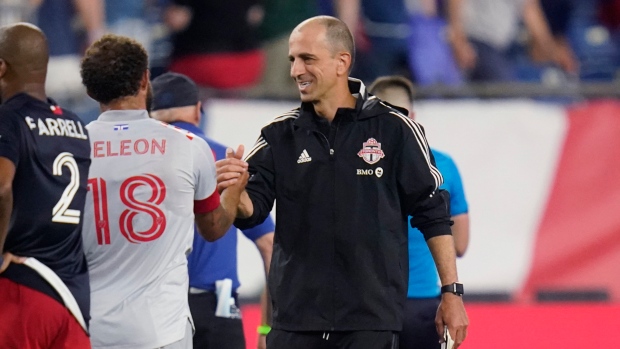 Toronto FC interim coach Javier Perez, right, is congratulated by midfielder Nick DeLeon (18) at the conclusion of the second half of an MLS soccer match against the New England Revolution, Wednesday, July 7, 2021, in Foxborough, Mass. Toronto won 3-2. (AP Photo/Charles Krupa)

Despite only coming on board in mid-February, interim coach Javier Perez goes back a way with more than a few Toronto FC players.

For them, the man known simply as Javi is a known quantity -- and a steady hand on the TFC tiller.

"He was my head coach with the U.S. youth national team," said midfielder Mark Delgado. "I've known him for many years now and I have an idea of how he likes to play and he has a good idea of how I like to play and my strengths and how I can help the team.

Like Delgado, veterans Michael Bradley and Jozy Altidore know Perez from their days with U.S. Soccer where the Spaniard served as a youth coach and senior assistant. Goalkeeper Alex Bono, somewhat mischievously, recalled Perez cut him from the U.S. youth team.

Toronto has looked more organized and composed under Perez, who took over July 4 after Chris Armas was fired with the team at 1-8-2 and riding a six-game losing (and seven-game winless) streak.

Delgado says the soft-spoken Perez has a good way with his players, including letting them know what is expected.

"I think he has a good understanding with every one of us off the field and on the field. He just puts it out there -- 'I need this from you. Can you do this? Yes or no? Yes, of course, obviously it's a yes. You want to be on the field and get minutes. At this moment things are very tight. We need results and everyone is up for the job that's needed.

"That's Javi. Great guy. Very patient … When we step on that field, everyone is very clear on what we need to do. I think he's done a great job."

Ahead of Wednesday's 1-1 tie with the visiting New York Red Bulls, that included warning Delgado that he might be needed at fullback because of Kemar Lawrence and Richie Laryea being away at the Gold Cup. So he was ready to shift position when Brazilian fullback Auro limped off in the 18th minute.

Toronto needs to be on the same page, after enduring a woeful start to the season. Only Inter Miami (2-8-2) has fewer points in the 27-team league standings and it has two games in hand on Toronto.

TFC is currently 10 points out of the playoff picture.

"Every game, from now on until the end of the season, is a must-win game," said Perez.

Perez, who was an assistant coach at New York City FC before joining Toronto, was previously a youth coach with Real Madrid from 2001 to 2007 before coming to the United States. His CV includes a UEFA Pro Licence, UEFA's highest coaching certificate, and a Ph.D. in Sports Science from Universidad De Leon in Spain.

"Many of these (Toronto) players I've known them for 10 years. And that always helps. Definitely," said Perez. "You know the ins and outs, the strengths of each one of the players and you can help them a little bit better to maximize their potential.

"So it's definitely an asset, a quality that me as coach I can take advantage (of)."

Toronto is missing four players who are at the Gold Cup: Jonathan Osorio and Laryea (Canada), Eriq Zavaleta (El Salvador) and Lawrence (Jamaica). Striker Ayo Akinola's time with Canada at the CONCACAF championship was cut short by a season-ending knee injury.

With Laryea and Lawrence away and Auro's fitness a question-mark, Toronto is short on fullbacks outside veteran Justin Morrow. The good news is Auro's prognosis is better than expected with the Brazilian suffering from a leg contusion. Perez says he will travel with the team and will be evaluated Saturday.

While Toronto played its last two games at BMO Field before a limited number of fans, Perez said there was no word yet on the status of the team's next home match, scheduled for Aug. 1 at BMO Field against Nashville SC.

"Hopefully we can play at home. We strive for that," he said.

CAUTION: Toronto's Michael Bradley and Omar Gonzalez face a suspension with their next yellow card.

LOST LEAD: Chicago had to settle for a 2-2 draw with visiting D.C. United mid-week, blowing a 2-0 lead with goals conceded in the 82nd and 87th minute. Chicago had won 58 straight matches when leading by at least two goals in the 75th minute or later