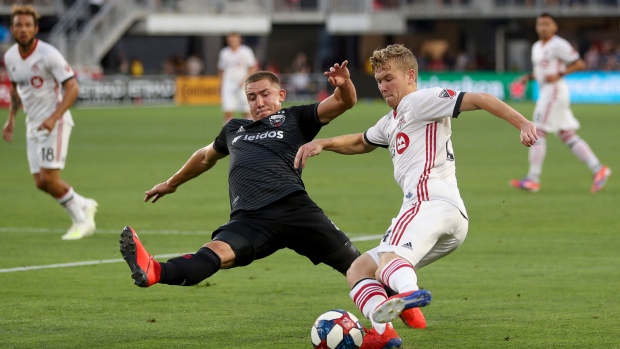 Toronto FC was left fuming after a 1-1 tie at D.C. United on Saturday night.

D.C. pulled even on a 92nd-minute Wayne Rooney penalty at Audi Field. The penalty was called by referee Robert Sibiga after consulting video review, with Frederic Brilliant judged to have been pulled down on a corner.

But Toronto alleged that fullback Richie Laryea had been fouled in the buildup of the play.

"It's a foul. It's a simple call," Toronto coach Greg Vanney told reporters after the game.

Toronto was also aggrieved that the home side was not called for a penalty in the 80th minute when substitute striker Ayo Akinola was bodychecked to the ground in the D.C. United penalty box.

"Go look at the VAR, take a close look. Make your own decision. Because to me the player gets fouled in the box," said Vanney.

The coach called it a game-changing call.

"That guy did not get any part of the ball and got a lot of Ayo in the box," said Vanney.

Laryea was also unhappy at not getting the win.

"It's unfortunate once again. This VAR and whatnot is holding us back from today three points and other days a point or whatnot. So it feels like we've been robbed in some senses."

Toronto striker Jozy Altidore, in Philadelphia for the U.S. quarterfinal clash with Curacao at the Gold Cup, also had an opinion.

"MLS refs are some of the worst in the world. Absolutely horrible," Altidore wrote on his verified Twitter account which has 913,000 followers.