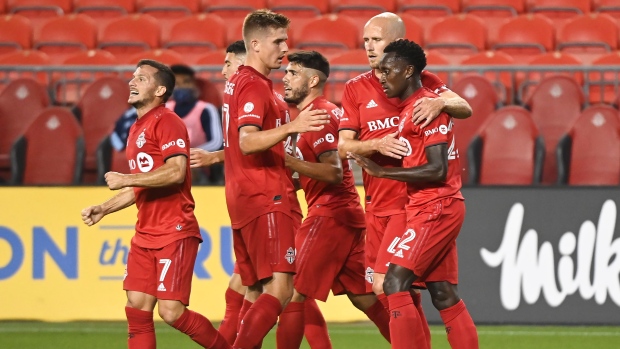 As a grinding stretch of five games in 16 days comes to a close, league-leading Toronto FC has something to look forward to.

Recovered from a knee injury, captain Michael Bradley could see some minutes Sunday against Atlanta United (5-9-4) at Pratt and Whitney Stadium at Rentschler Field in East Hartford. And Toronto's travelling party gets to go home after the game, albeit only for two days and under quarantine.

"We want to finish strong but at the same time we want to get out of this series (of games) as healthy as we can and move on to the next series ... This is definitely the most gruelling, stretch that we've had so far," said Vanney.

"The days off will be very much welcome. The opportunity to see family will be welcome, for sure."

So is the possible return of the skipper, who has missed the last nine games since being hacked to the ground Sept. 1 by Montreal midfielder Emanuel Maciel.

"We'd like to get him some (playing) time," Vanney said of Bradley.

Unbeaten in its last eight games (6-0-2), Toronto (11-2-5) has shown its depth and ability to adapt with the likes of Bradley, star striker Jozy Altidore and veteran fullback Justin Morrow all missing games through injury.

Canadian Jonathan Osorio, quietly enjoying another fine season, has captained the side in Bradley's absence and formed an effective midfield pivot with Marky Delgado.

But a brief midweek midfield letdown led to a 77th-minute wonder-strike by 17-year-old Caden Clark as the New York Red Bulls rallied for a 1-1 tie, snapping TFC's five-game winning streak.

Toronto playmaker Alejandro Pozuelo lost a battle for the ball at midfield and Delgado opted not to foul Clark just before he took his shot.

"They're a team a little bit this year that's trying to find some consistency in their footing," said Vanney. "But they have some quality on their team, especially when they have healthy bodies out there."

"There still a decent team in possession," he added. "I think they're a little bit vulnerable at times on the defensive end. But they're still a quality team and they still have the culture and history recently of being a very good team that has played at a high level."

Atlanta, which made its league debut in 2017, won the MLS Cup in 2018 and held a career 54-28-20 regular-season mark going into this season. It took Toronto eight seasons to match that number of wins.

But times have changed. The Five Stripes went into weekend play hanging on to the last playoff spot in the East by goal difference over Chicago, which had a game in hand,

Atlanta is coming off a 1-1 midweek tie with Inter Miami but has won just three of 13 games (3-6-4) since parting ways with de Boer after losing all three games at the MLS is Back Tournament in July.

Atlanta has taken just 13 of 39 points on offer since the coaching change. In contrast, Toronto has taken 29 points during a 9-2-2 run since the Florida tournament.

"It's time that we start putting points on the board," said Atlanta's English midfielder Mo Adams. "Because the season is ticking down and we're in 10th spot right now."

Barco has missed the last seven games while Escobar sat out the Miami game.

Like Toronto, Atlanta is facing its fifth game in 16 days.

"It's been pretty demanding. But I do think with some of our top guys that have been missing quite a bit, we might be getting a good group together at the right time," said Glass. "And then you just never know. If it all clicks at the right time, it could be good."

Atlanta, meanwhile, will be keeping a close eye on Pozuelo, who continues to impress in an MVP-calibre campaign. The Spaniard leads the league in assists (10) and is tied for fourth in goals (eight).

"We know he's a clever player, we know he's very good. We've seen that in the past," said Glass. "Yeah we're well aware of that but hopefully we'll be ready for it."

HISTORY: Toronto is 2-1-3 all-time against Atlanta in regular-season play. Toronto won 2-1 when they met last October in the Eastern Conference final at Mercedes-Benz Stadium.

TOUGH LATE: Atlanta has conceded a league-low six goals in the second half of matches this season. Toronto has given up 10 second-half goals

This report by The Canadian Press was first published Oct. 17, 2020