Toronto FC missing key players ahead of game against Kansas 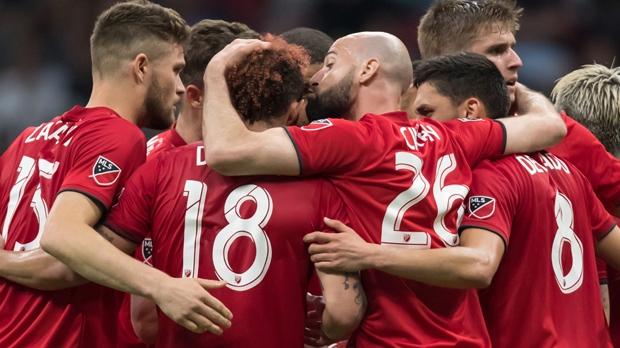 Toronto FC's Laurent Ciman (26) kisses Nick DeLeon (18) as they celebrate DeLeon's goal against the Vancouver Whitecaps during the second half of an MLS soccer game in Vancouver on Friday May 31, 2019. THE CANADIAN PRESS/Darryl Dyck

Toronto FC will be missing some star power when it tries to end a six-game winless skid Friday night against a slumping Sporting Kansas City side.

Americans Jozy Altidore and Michael Bradley are on international duty ahead of the Gold Cup along with Canadians Jonathan Osorio and Ashtone Morgan. TFC recently signed defender Omar Gonzalez but he won't be available for another month until the transfer window re-opens.

Head coach Greg Vanney said the situation will give other players an opportunity.

“Everybody has got to step up and do their role,” Vanney said after a team training session. “We've got to try to stick together and execute.”

Vanney's side would like to enter the upcoming two-week Gold Cup break on a high.

“Everybody has played since the beginning of the year and everybody has had an opportunity,” Vanney said. “We knew this stretch was coming. In the process of preparing for this stretch, I've tried to give different guys opportunities along the way.

“So now it's that time where guys who maybe weren't as relied upon earlier are going to be heavily relied upon.”

Sporting KC will try to stifle the offensive prowess of Alejandro Pozuelo, who had some decent chances last week against the Whitecaps.

Pozuelo and Altidore share the team lead with five goals apiece. Jordan Hamilton will also try to carry some of the offensive load. He's next on the team scoring list with three goals, tied with Osorio.

“We know we're in a bit of a rut, we're well aware of that,” said defender Drew Moor. “So we certainly want to put things right on Friday night.”

Sporting Kansas City (3-5-6) is also shorthanded with four players in Europe for the resumption of Euro 2020 qualifying. They include Botond Barath and Krisztian Nemeth (Hungary), Nico Hasler (Liechtenstein) and Johnny Russell (Scotland).

The visitors, who are coming off a 1-1 draw at Houston last week, have one victory in their last 10 games.

“We are who we are and we need to use everything we have here to win on Friday,” Sporting midfielder Ilie Sanchez told reporters in Kansas City. “No one else, nothing else is going to help us.

“Right now all that's on our minds is three points in Toronto.”

The teams haven't played since an August 2015 matchup at BMO Field. Sporting Kansas City posted a 3-1 road win that day and owns an impressive 13-4-5 edge in all-time meetings.

“We don't see them that often but I feel like we know them well,” Moor said. “They've kept the same kind of core group of guys together and they're a team that likes to play the game on their terms.

“They possess the ball well and I think it's important that we're well aware of all their tendencies.”

When the 30-year-old arrives, he should provide a boost for a back end that has been suspect at times this season.

Toronto players will wear multi-colour pride tops before the game in celebration of Pride Night at BMO Field.

A viewing party will be held at the venue after the game to watch Game 4 of the NBA Finals between the Toronto Raptors and Golden State Warriors.