After inheriting a mess in 2014, Greg Vanney marks 100 wins at Toronto FC's helm 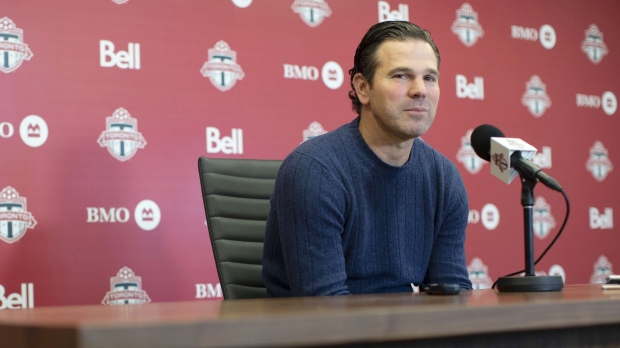 Toronto FC head coach Greg Vanney speaks to the media during an end of season availability in Toronto on November 13, 2019. THE CANADIAN PRESS/Chris Young

TORONTO - Greg Vanney inherited a mess when he took over Toronto FC with 10 games to go in the 2014 season.

“We've got to look at it and decide whether we've got the right set of technical skills, the right resources and the right leadership,” Tom Anselmi, then president and CEO of Maple Leaf Sports & Entertainment, said in October 2012 in announcing TFC was rolling back prices to 2007 inaugural season levels in a bid to stop season ticket-holders from abandoning ship.

“We haven't got it right,” Anselmi added. “We've got to get it right.”

It took two more coach firings to do just that. Vanney, who had been the club's assistant general manager and academy director, was elevated to head coach by then-GM Tim Bezbatchenko when Nelsen was dismissed in August 2014.

Essentially Bezbatchenko's coach in waiting, Vanney took over after Nelsen lost a power struggle with his GM.

One hundred wins later (in all competitions), the 45-year-old Vanney has helped build an MLS club with a winning culture and impressive trophy case.

“It's a testament to what he's built here,” star striker Jozy Altidore said after Saturday's milestone win over New York City FC. “As much as we've had some great players come through here the past four or five years, none of it happens without a man with such a vision and a strong personality like him. I think he's done a terrific job.”

Vanney takes pleasure that the 100 wins have come with hardware, from an MLS Cup and Supporters' Shield to three Canadian championships. While it could have been more - TFC has lost penalty shootouts in the finals of the MLS Cup, CONCACAF Champions League and Canadian Championship - the trophies are hard to miss when you enter the team's north Toronto training ground.

“It's been obviously a long process and a lot of people involved,” Vanney said Tuesday. “Two presidents, two GMS, a set of assistant coaches and medical staff. All of them have played a huge role in this whole process.

Vanney is good people. Thanks to a tireless work ethic, he spends long hours at Toronto FC's training centre. Three of his four kids are part of the academy so he can combine work and parenting. But he keeps a close eye on all of the academy talent.

Vanney credits Bezbatchenko, now in charge of his hometown Columbus Crew SC, for helping turn his vision into reality.

“For us, one of the keys here was to not have a bunch of different ideas. Originally it was Tim and I. My role was to oversee the soccer side of things and really kind of shape the vision of the future for soccer and what our team was going to look like and what the academy would look like and all that stuff.

“Then he put all the framework around it to support it and to make sure that financially we could do it and we could get all the things we needed. There weren't a bunch of ideas. We were on the same page and we were able to create a clear pathway and stick with that.

“I think before there were a lot of different ideas being thrown into the hat and no clear direction. And then you end up all over the place. And that's the worst possible scenario.”

Vanney is a soccer junkie. He jokes about having a laptop nearby at all times at home as he continues his preparations for the next game.

His coaching staff remains a tight circle with deep roots to Vanney that extend well before TFC. They are on the same page.

He is long on patience, as witnessed by his generous time spent with the media. But he is not afraid to make his point.

“I was close enough to him on the sideline today, he does definitely have a good vocabulary,” fullback/midfielder Richie Laryea said Saturday with a smile. “He's usually calm and composed.”

Vanney's message was loud and clear at the end of the 2014 season after going 2-6-2 as head coach. He made no secret he was unimpressed by the culture he inherited, including attitude and fitness.

“We need to act and build a culture of success and expectation on a daily basis and live up to those standards every day,” he told the club's end-of-season media availability.

And he issued his players a challenge: Get better during the off-season.

“They have to show me and prove to me they want to be here and be part of this organization as we turn the page,” he said.

More than five years later, Vanney looks forward to the next 100 wins.

“It's been a great journey and we continue,” he said. “I think our team's in a good spot to keep driving success here at the club. We've got young players that are coming through now. I think that's kind of the next 100. Can we bring some of our younger academy guys who have developed in our system and hopefully in this 100 games some of those guys can step in and show that they're ready to take the mantle and to be some of the big guys in our teams, not just spot players but their names in permanent marker in the starting lineup.”

With 13 players aged 24 or under on Toronto's first-team roster, including five teenagers, the TFC youth is already hard to miss.