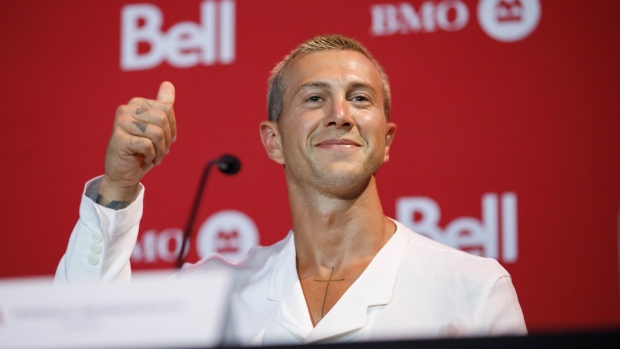 TORONTO - While the existing product withers on the field, Toronto FC has assembled some considerable new firepower off it in recent days.

The hope is the cavalry is ready to ride in.

On Monday, the Major League Soccer team unveiled its latest Italian in former Juventus winger Federico Bernardeschi. The 28-year-old arrived in style, taking the stage at the Real Sports bar/restaurant in matching white linen pants and open-neck shirt, showing off a simple tattooed cross on his chest under a beaming smile.

He looked all the world like he had just walked off a yacht, which would not be out of his snack bracket.

“Hi Toronto. Nice to meet you,” he said in English.

Bernardeschi's formal introduction followed his first TFC practice. The Italian will wear No. 10 with Toronto, which had been Alejandro Pozuelo's number. The Spanish playmaker was traded to Inter Miami CF on July 7 to make room for Bernardeschi.

Explaining he had “finished (his) path in Italy” after his five years with the storied Juventus club, Bernardeschi said MLS offered a new beginning.

“Me and my family, my wife and my children are so very very happy to be here,” Bernardeschi said in English.

Bernardeschi's wife Veronica Ciardi has a TV career of her own, having appeared on Italy's version of “Big Brother” and as a TV correspondent. They have two daughters, three-year-old Deva and one-year-old Lina.

Bernardeschi is the third Italian to join TFC this season, following star winger Lorenzo Insigne and veteran fullback Domenico Criscito who also arrived for the July 7 opening of the MLS secondary transfer window. Like the 31-year-old Insigne, Bernardeschi has designated player status on the roster, meaning only a portion of his salary counts against the team's salary cap.

Only the 35-year-old Criscito has stepped on the field yet. Insigne's debut has been delayed by a calf issue with Saturday's home game against Charlotte FC seen as a target date for his debut.

Asked if Bernardeschi and Insigne will play Saturday, head coach Bob Bradley paused. “We hope so,” he said.

“Lorenzo is still training on the side but we're hopeful that in the next day or two, he'll be joining the group,” he added. “And then as we get to the end of the week, we'll know.

“We want to get them both on the field as quickly as possible. But it has to be done in a smart way.”

After turning heads earlier in his career at Fiorentina, Bernardeschi moved to Juventus in July 2017 on a 40-million-euro ($52.5 million) transfer that came with a five-year contract.

He did not enjoy as much success as expected during time in Turin but still won a lot of hardware. He had 12 goals and 24 assists in 183 Juventus appearances in all competitions, winning three Italian league titles, two Coppa Italia and two Supercoppa Italiana. His contract with Juve expired June 30.

Bernardeschi who has both Champions and Europa League experience, has won 38 caps for Italy with six goals and six assists. He told Monday's news conference that he plans to speak to Italian coach Roberto Mancini about his future with the national team.

No shrinking violet, Bernardeschi danced on the stage during a photo-op Monday as TFC fans sang above him on the balcony.

His talent is easy to see.

Bernardeschi is good on the ball, able to operate in tight spaces. He has excellent vision on the pitch, able to unlock defences and find teammates with an accurate pass. He is also a dead ball specialist, able to bend a free kick past a goalkeeper, and can finish.

Bernardeschi and Insigne both figured in Italy's euro 2020 championship win over England. Insigne started while Bernadeschi came on in the 86th minute and scored the decisive penalty in Italy's 3-2 shootout win after the game finished tied 1-1 after extra time.

“I want to play with Lorenzo,” Bernardeschi said in English, before turning to the neighbouring interpreter for help with an Italian phrase.

“As soon as possible,” she translated.

Chanting, singing fans looking down from the balcony of the hangar-sized sports bar that day in January 2014. A double-decker bus with the Toronto FC logo and the words “It's a Bloody Big Deal” was parked outside.

Defoe only lasted a season, recording 11 goals in 19 starts. But Michael Bradley, Bob's son who was also introduced that day, is still going strong 277 games later and, as longtime captain, is the heartbeat and conscience of the club.

Back then, TFC sported a 51-105-66 career league record and had yet to make the post-season.

Twenty players from last year's first team have moved on - as has defender Carlos Salcedo, a marquee signing this season who returned to Mexico for family reasons after 17 appearances in 5 1/2 months.

Toronto president Bill Manning says the team is in no rush to sign a third DP.

“If we're going to do that, it needs to be the right (player),” he said, adding it could wait until the winter transfer window.

Many will be watching to see what the Italian trio can do in Toronto. Bernardeschi comes with 2.9 million followers on Instagram, more than nine times TFC's 309,000. He has 253,300 followers on Twitter.

While Insigne and Bernardeschi give Toronto an elite attack, likely flanking Spanish striker Jesus Jimenez, there is work to do on TFC's depleted defence.

“We understand the areas that we must improve,” Bradley said.

Insigne signed a pre-contract with Toronto in early January, setting up his arrival once his contract with Napoli expired at the end of the Italian season. His designated player contract makes him the highest-paid player in MLS, surpassing the US$8.15 million that Chicago Fire star Xherdan Shaqiri is making this season.

Insigne is a former Napoli captain while Criscito was skipper as Genoa.

Discussions with Bernardeschi have gone on for a while. Manning said he met with the player's father in October and Bernardeschi himself visited Toronto in June in secret.

The MLS club secured his services over a number of European clubs.

“It started out as a concerned effort to sign Lorenzo and it just kind of bloomed into these other signings as well,” said Manning.

Bernardeschi joined the Fiorentina academy at nine years old, eventually going out on loan to Crotone in Serie B for the 2013-14 season and making his pro debut at 19. He had 23 goals and 12 assists in 91 games with Fiorentina.

This report by The Canadian Press was first published July 18, 2022