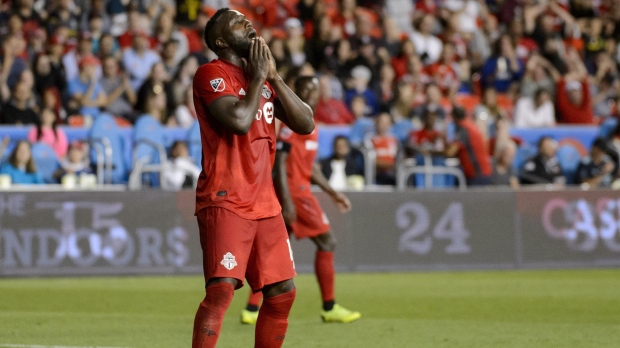 Toronto FC forward Jozy Altidore (17) reacts after missing the net during second half MLS Soccer action against the Montreal Impact, in Toronto, on Saturday, Aug. 24, 2019. Toronto FC striker Jozy Altidore offered a blunt update Monday on the quad strain that has kept him out of the MLS playoffs. THE CANADIAN PRESS/Andrew Lahodynskyj

Toronto FC striker Jozy Altidore offered a blunt update Monday on the quad strain that has kept him out of the MLS playoffs.

“It's been a while. At this point, it'll take a little bit of a miracle to be out there on Sunday,” he said, referencing the MLS Cup final in Seattle against the Sounders. “But that's where I am. And I've just got to try to keep trying to get myself there.”

Pressed on what's needed to get back on the field in time for Sunday's sold-out championship game at CenturyLink Field, Altidore repeated “a miracle” and laughed.

“As simple as that,” he added. “That's where we're at at this point. Like I said, I just keep trying to chip away, trying to get myself there.”

“I believe in miracles,” he said. “Just keep working and put your head down and go for it and we'll see. It's a big game. It's going to take a lot to keep anybody out of it.”

“We'll see, but I'm optimistic that we can keep pushing him there,” he added.

Of course, the TFC striker could be offering up misinformation ahead of the third championship meeting between Toronto and Seattle in the last four seasons. Seattle had the last laugh in 2016 via penalty shootout while Toronto won 2-0 in 2017.

While Altidore said he was feeling “better and better,” he declined to go into details of how the injury was holding him back.

“You'd have to ask the medical team that stuff,” he said. “I don't know all that stuff. Like I said before, it's where I'm at right now.”

The U.S. international has not played since walking gingerly off the field in the 70th minute of Toronto's 1-0 win over Columbus on Oct. 6 in the regular-season finale, after being clattered in a tackle in the opposition penalty box.

He did not dress for Toronto's playoff wins over visiting D.C United (5-1 after extra time) and at New York City FC (2-1) and Atlanta United FC (2-1).

“With each game, we have optimism - more as we get farther and farther down the road,” said Vanney. “But we knew the first few were going to be really challenging.

“This one, again as I've said the whole time, he's not going to be 100 per cent. The question is will he be far enough along and be functionally mobile enough to do the things that he has to do for however long as he has to do it. Those are really the questions.”

Altidore is a physical presence at the tip of the Toronto spear, battling opposition centre backs and often holding up the ball to bring others into play. Pozuelo tends to float in different directions, pulling defenders into places they don't want to be while the Spaniard looks to open the door to others.

Altidore had 11 goals and seven assists in 22 regular-season games this season. Pozuelo led the team with 12 goals and 12 assists in 30 games.

Altidore said while he was a “little” frustrated at his injury progress, he said the team is ready.

“The group is prepared,” he said.