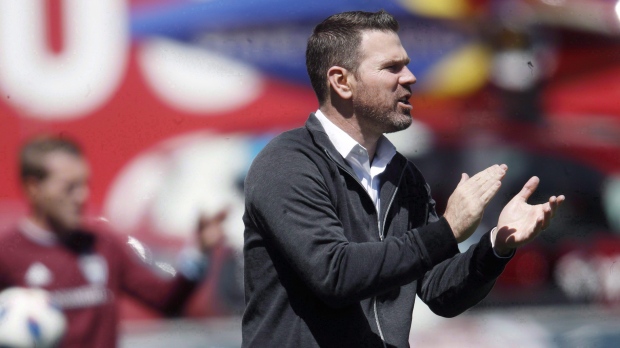 A father of four in addition to being Toronto FC coach, Greg Vanney is likely used to have his nerves tested. Vanney is seen directing his team against the Colorado Rapids in the first half of an MLS soccer match in Commerce City, Colo., on April 14, 2018. (THE CANADIAN PRESS/AP, David Zalubowski)

"A lot of decisions to make now," Vanney said happily after training Tuesday. "The team doesn't pick itself so easily."

That's good new. Injuries, international absences and other holes in the roster cut into Vanney's options and made for a difficult start to Toronto's season.

TFC's tip of the spear is back in the form of burly striker Jozy Altidore. Spanish playmaker Alejandro Pozuelo will soon be able to share the creative load with newly signed Venezuelan Erickson Gallardo.

Vanney finally has options on the flank with Jacob Shaffelburg forcing his way into the mix.

Captain Michael Bradley is shielding the back four. And new centre back Omar Gonzalez is marshalling the defence.

Vanney believes he finally has the right pieces for the TFC puzzle, allowing the team to play the way he wants it to -- with replacement pieces to fill the gaps as needed.

While Toronto is 3-7-4 over its last 14 matches, it has only lost once in its last four outings (2-1-1). It feels like TFC is finally climbing out of the hole it dug for itself.

"We're getting there," said Vanney. "For me, we're still a work in progress with everybody back together, to tighten up some of these things and recognize some of these situations that are presenting themselves for us."

With nine of the next 10 games against Eastern Conference opposition, there is still time to climb the standings. Going into midweek play, Toronto (7-8-5) holds down the seventh and last playoff spot in the East.

The Red Bulls (9-7-4) are third in the East, where just six points separate the teams in second and seventh place. But with a road record of 2-4-3, it is tied for 13th in the league in success away from home.

Both teams are coming off derby victories, with Toronto winning 2-0 at Montreal and the Red Bulls edging visiting New York City FC 2-1.

Chris Armas's team presents a different challenge than Montreal did. The Red Bulls are known for their high press, making for a faster-paced, more chaotic game.

Toronto midfielder Jonathan Osorio has recovered from the illness that kept him out of the win in Montreal. Veteran defender Drew Moor is back training after a hamstring injury.

Gallardo is working his way into shape after not playing much the last month.

Winger Nick DeLeon, who came off at halftime of the Montreal game with a groin issue, is questionable.

Vanney says he likes having a second forward with Altidore, but only as an option. Having Pozuelo and two forwards on the pitch would cut into the team's defending, he believes.

"I think our second forward or third forward comes from our wide positions," he said.

But he says Ayo Akinola and the newly acquired Patrick Mullins can either spell Altidore or play alongside him.

WHO'S HOT: Austrian winger Daniel Royer scored both Red Bulls goals against New York City FC, the 30th and 31st of his MLS career and his fifth multiple-goal game. Spanish playmaker Alejandro Pozuelo scored his eighth of the season in Toronto's win over Montreal, adding to his eight assists.

HALFTIME TALKS: The Red Bulls are tied for the league lead with 10 goals scored in the 45th to 60th minute. Toronto has scored twice over the same time span.

LAST SEASON: The Red Bulls won both meetings. A 1-0 decision at BMO Field was New York's first in Toronto since 2013, snapping a five-game home undefeated streak for TFC. New York is 4-6-5 all-time at BMO Field.

IF YOU'RE GOING: TFC advises there will be no public parking at BMO Field due to conferences and other events.