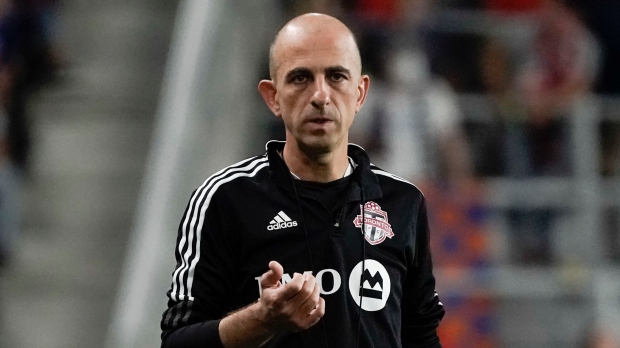 Toronto FC head coach Javier Perez stands on the sidelines during the second half of an MLS soccer match against FC Cincinnati Saturday, Sept. 11, 2021, in Cincinnati. (AP Photo/Jeff Dean)

TORONTO - Javier Perez, who took over as coach from the fired Chris Armas on July 4, will not be back with Toronto FC.

Perez started the year as an assistant coach but was put in charge of the team after it stumbled to a 1-8-2 start to the MLS season. Under the Spaniard, TFC went 5-10-8 and finished 26th overall in the 27-team league.

“We would like to thank Javier for his hard work this season,” Toronto FC president Bill Manning said in a statement. “He stepped into a difficult situation and was a true professional in every regard. We wish him well in his next endeavour.”

Toronto rebounded, at least initially, under Perez. The team scored an upset 3-2 win at New England in Perez's first game at the helm and went unbeaten in his first five games (2-0-3) in charge. But it went winless in its next eight games (0-7-1).

The streaky play continued and Toronto finished the season on a six-game winless run (0-3-3) in league play.

Perez's candour seemed to grow as the season wore on, perhaps having seen the writing on the wall with regards next season.

“I have mixed feelings, if I'm honest with you,” he said with three games remaining in the season when asked about the team's progress. “Because I think some games, we (do) well. Sometimes we take two steps forward, one backward, or two backward, one forward.”

“I don't like to give excuses,” he added. “But every time that something seems to click in a positive way, we have some setback. Meaning we have injured players, we cannot run the same starting lineup in the next game. All these situations make it really difficult for the team to gain some momentum and have some stability.”

And after a 1-1 tie Oct. 30 in Atlanta that saw TFC go behind early when goalkeeper Quentin Westberg got his footwork wrong trying to clear the ball, Perez was blunt.

“If we didn't make this mistake - it's a completely avoidable mistake, like many many this season - tonight we would be talking about a win and not a tie,” said Perez.

“For me it's almost like arrogance,” he added. “Sometimes we have to be more humble and we have to simplify things for ourselves.”

Several of the TFC players knew him from his time with U.S. Soccer.

Perez provided stability after taking over in a caretaker role, a steady hand on the rudder.

On the sidelines, he always came equipped with a notebook and stopwatch. And before games, he was able to reel off statistical and personnel strengths of the opposition squad.

“I think Javi's done a good job since coming on,” said fullback Richie Laryea. “He's helped us win some games. Also coming home has helped as well. But he's calmed us and got us back to playing some good football at home in front of our fans.”