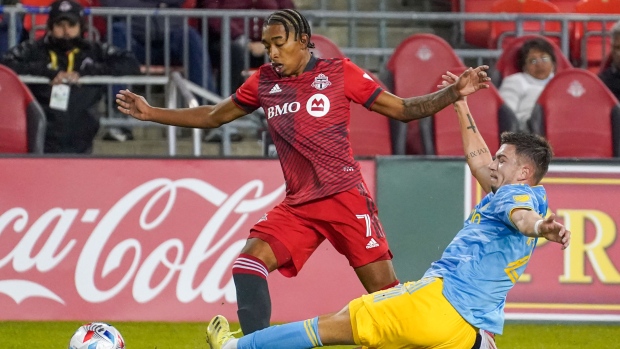 Toronto FC's season is on the line Wednesday, with the visit of Pacific FC for the Canadian Championship semifinal.

Whatever happens at BMO Field, Pacific (13-8-6) will still be atop the Canadian Premier League, albeit by one point over Forge FC and Cavalry FC, with one game left before the playoffs. A Toronto loss and TFC (6-17-10) will have nothing to salvage from a failed season that ranks as its worst in almost a decade.

Even if it wins, Toronto will need to beat CF Montreal in the final to get something out of the tournament. And chances are a shiny trophy will only be a footnote to a dismal campaign.

But a championship is a championship. And the Voyageurs Cup comes with opportunity in the form of a berth in the Scotiabank CONCACAF Champions League, the flagship club competition in the region.

Toronto wraps up the MLS regular season Saturday against D.C. United, whose 7-1 drubbing July 3 represents the nadir of TFC's season.

There have been more downs than ups since. The current version of Toronto lies somewhere in the middle - the club is winless in its last five games (0-2-3) but has taken points off three playoff contenders - Montreal, Philadelphia and Atlanta - in recent ties.

Coach Javier Perez says he likes what he sees in his team these days.

“I think now we would be in a good place to start the season,” the Spaniard told reporters Tuesday. “Unfortunately it's the end of the season. But I think we are in the best moment of the season, which is bad news. It's sad because we wish we were this good a few months back. But it's good news because now is a critical moment and I think we have an opportunity in front of us, which is the Canadian Championship.”

Perez, who was elevated to head coach after the D.C. United debacle prompted the firing of Chris Armas, notes that the team has since beaten league-leading New England and Nashville, currently third in the East, and tied No. 2 Philadelphia, No. 4 New York City FC and No. 5 Orlando.

“I think we showed that we have the potential that is needed to be where we should be, which is the playoffs. But that's gone and now we have a different competition, which is the Canadian Championship. And we have a big opportunity in front of us to touch silverware.”

Still, Toronto languishes 13th in the 14-team Eastern Conference - and 26th in the 27-team league. The club has gone 5-9-8 in league play under Perez, whose future with the club has yet to be announced.

While Pacific tops the CPL, it has lost four of its last six in league play. All four defeats were by one goal, however.

Coach Pah-Modou Kah looks at the bigger picture, saying ups and downs are normal in a 28-game season.

“The table and how we've been playing doesn't lie,” he said. “We've been consistently since the start of the season between first and third place. And we are still in first place so that shows how we've been.”

Montreal made it to the Canadian Championship final by dispatching CPL champion Forge FC in an 11-round penalty shootout, ultimately decided by the goalkeepers stepping up to the penalty spot with Sebastian Breza stopping Forge counterpart Triston Henry and then scoring himself to give Montreal an 8-7 win.

Pacific is aware of what's on the line although Kah is looking at the steak, not the sizzle.

“For me it's the biggest game externally, but for the boys it's just another 90-minute game. And that's where our focus is â€¦ We're here to play the game, we're not here to play the occasion. The occasion is for everybody else,” said Kah. “We just focus on what we need to do.”

Born in Gambia, Kah moved to Norway as a child. He played for clubs in Norway, Sweden, the Netherlands, Qatar and Saudi Arabia before coming to MLS in 2013 to join first Portland and then, in 2015, Vancouver.

The Norwegian international won the Canadian Championship with the Whitecaps in 2015, designing and purchasing championship rings for all the players and staff to mark the club's first Canadian title.

Kah was hard to miss in the aftermath of the 2-0 win over Montreal at B.C. Place Stadium, which sealed the title 4-2 on aggregate. He memorably showed off some dance moves on a hoverboard on the field.

Kah retired in February 2017, moving into coaching with the Whitecaps and then FC Cincinnati before joining Pacific ahead of the 2020 CPL season.

Toronto got a bye to the quarterfinal where it thumped York United FC 4-0.

Pacific advanced by knocking off the Vancouver Whitecaps 4-3 in the preliminary round - Vancouver fired coach Marc Dos Santos the next day - and Cavalry FC 1-0 in the quarterfinal.

“The lesson is there is no small enemy and you have to take very seriously every game,” said Perez.

Toronto will be without the injured Yeferson Soteldo, Eriq Zavaleta and Alex Bono along with long-term absentees Ayo Akinola, Tsubasa Endoh and Ralph Priso.

Perez says there are question-marks over some other players but did not specify who. Striker Ifunanyachi Achara, who missed the last four games through injury, is available.

Due to the pandemic, the 2020 Canadian Championship was reduced to a one-off final between Toronto and Forge that has yet to be played or even scheduled. Toronto qualified by virtue of its play against Montreal and Vancouver during the pandemic-affected 2020 MLS season. Forge got the nod after winning the Island Games, the CPL's 2020 truncated season.

Montreal won the last Canadian Championship contested, defeating Toronto in a penalty shootout after the two-legged 2019 final was knotted 1-1 on aggregate.

This report by The Canadian Press was first published Nov. 2, 2021.