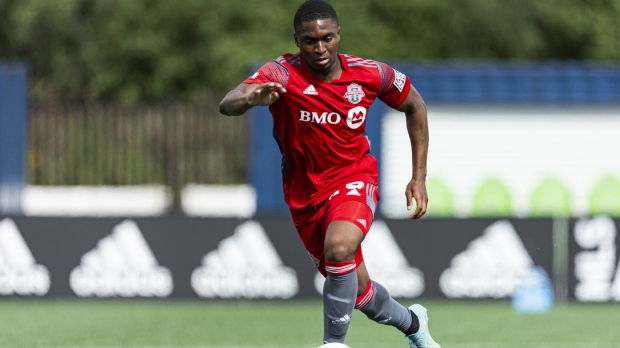 Hugo Mbongue is seen during practice in an undated handout photo. Toronto FC has signed 18-year-old Mbongue, the younger brother of former TFC midfielder Ralph Priso, to a homegrown contract through 2025 with an option for 2026. THE CANADIAN PRESS/HO-Toronto FC, Lucas Kschischang, *MANDATORY CREDIT*

Toronto FC has signed teenage forward Hugo Mbongue to a homegrown contract through 2025 with an option for 2026.

The 18-year-old Mbongue, the younger brother of former TFC midfielder Ralph Priso, becomes the 31st player in club history to sign for the first team from the Toronto academy.

“Hugo is a talented young striker who has worked hard to improve his overall game,” Bob Bradley, Toronto's head coach and sporting director, said in a statement. “We look forward to seeing Hugo's progress in his professional career and are confident that he's going to become a player who can help the first team for many years.”

The Canadian youth international signed an MLS Next Pro contract with Toronto FC II in May 2022, scoring four goals and adding five assists in 14 appearances (11 starts) with the TFC second team during the inaugural MLS Next Pro regular season.

Mbongue originally joined the Toronto academy in March 2018 after stints with North Toronto Soccer Club and Clairlea-Westview Soccer Club. He represented the TFC academy from the under-15 to U-19 ranks from 2018 to 2021.

Priso, also a product of the TFC academy, was sent to Colorado in the July trade that brought midfielder Mark-Anthony Kaye to Toronto.

This report by The Canadian Press was first published Sept. 13, 2022