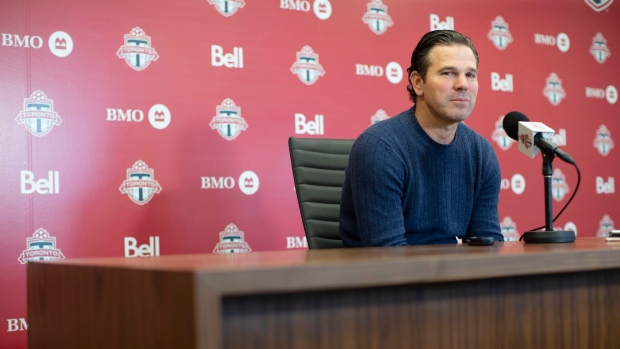 Toronto FC head coach Greg Vanney speaks to the media during an end of season availability in Toronto on Wednesday, November 13, 2019. THE CANADIAN PRESS/Chris Young

TORONTO - While the MLS Cup final loss in Seattle still stings, Toronto FC players and staff spoke confidently Wednesday about the club's place in Major League Soccer and the prospects of going after more trophies.

They pointed to the team's stretch run, going unbeaten in 13 regular-season and playoff games (7-0-6) before losing 3-1 to the Seattle Sounders in Sunday's championship game. They also referenced the team's success in recent years.

Toronto has made it to the MLS Cup final in three of the last four years, winning in 2017 and losing in 2016 and '19 - with all three matches against Seattle. TFC also made it to the CONCACAF Champions League final in 2018, losing a penalty shootout to Chivas Guadalajara.

“In four years, we've played in four major finals. I don't think there's anybody else in that time who's done that,” said captain Michael Bradley. “Obviously the disappointment on our end is that for playing four finals the way that we have, we're probably a few trophies short. And that part is disappointing and frustrating. But what you also learn is that winning and losing, winners and losers is not black and white.”

“When you look back now over the last few years, I think the club has clearly shown that it's one of the best clubs in the league,” he added. “When guys get here, I think they realize quickly how special a place it is. Guys around the league look at our club and look with real respect. Everybody here should be proud of what we've been able to do.”

Coach Greg Vanney and GM Ali Curtis talked of select additions, rather than wholesale changes in the off-season.

“I think we have a great core group. It's just going to be subtle changes,” said Vanney.

Re-signing Bradley, whose US$39 million, six-year contract expires at the end of the year, is top of the list with all parties suggesting that will happen sooner than later.

A striker to complement Jozy Altidore is also on the to-do list. Vanney cited a wish for “a little more punch to our attack,” while noting the team had done well scoring goals considering the pre-season exit of “two critical attackers” in Sebastian Giovinco and Victor Vazquez.

Altidore, for one, would appreciate the help.

“We can definitely use one more guy (on attack) - a winger or that type of player who can make things happen on its own. And be dynamic and get us goals,” he said.

“I thought we did well, though, this season in terms of being a complete team. We went through a lot, especially early on. But I thought we battled through it. The last part of the season, I thought, was really good.

Bradley, centre back Omar Gonzalez and Vanney talked of the need for more shutouts (Quentin Westberg and Alex Bono had five between them this season).

“We've got to lock that down and be able to win games 1-0 a little bit more often,” said Vanney.

“There's a next level of consistency for us, for sure,” added Bradley.

In other news Wednesday:

- Spanish playmaker Alejandro Pozuelo reiterated his desire to play the No. 10 role behind the striker, as opposed to other roles like on the wing.

- Vanney said he is looking to get 21-year-old Canadian midfielder Liam Fraser more consistent playing time, possibly via a loan move. “He needs to take another step forward because he has the tools. It's about honing those tools on a week-in, week-out basis.”

- Vanney has high hopes for 23-year-old Venezuelan midfielder Erickson Gallardo, who made just five league appearances since signing in early July. Vanney said Gallardo was dealing with injury, adapting to a new country and becoming a father for the first time. “I think he's going to be fantastic.”

- Vanney says his coaching staff will be back, with talks planned with Jason Hernandez to see if he wants to continue as an assistant after coming down from his front-office role - as manager of player engagement - in the wake of Robin Fraser's departure to the Colorado Rapids.

- Team president Bill Manning said a “safe standing area” is in the works for supporters groups in the south end of BMO Field in 2021. Next season, the north end of the stadium will be turned into a party zone a la WestJet flight deck, a standing-room-only section beneath the main video board at the Rogers Centre.

- Manning says he expects the percentage of season ticket-holders who re-up to be in the “low 90s.” The average in “a normal year” is in the “low 80s,” he said.

The 2019 season started with a CONCACAF Champion League 4-0 loss in Panama on Feb. 19 with Toronto fielding just six players who would go on to start in the MLS Cup final (Bradley, Auro, Justin Morrow, Chris Mavinga, Marky Delgado and Jonathan Osorio).

A 1-1 tie a week later in Toronto signalled TFC's exit from the competition.

The penalty shootout pain in 2019 came in the Canadian Championship final in June against the Montreal Impact.

There was a positive start to the league, however. Toronto was undefeated in its first four games (3-0-1). But after a 5-2-1 start, Toronto went winless in its next eight games (0-5-3).

Toronto (13-10-11) finished the season at an 8-3-7 clip and went undefeated in its last 10 regular-season games (4-0-6). A Decision Day win over Columbus, coupled with other results, moved Toronto into fourth place for a home playoff date with D.C. United.

Despite giving up a stoppage-time equalizer, Toronto went on win 5-1 after extra time before scoring road victories against New York City FC (2-1) and Atlanta United FC (2-1).

Then came Seattle, with Toronto dominating the first 57 minutes before Seattle opened the scoring with a deflected goal. The goal spurred the Sounders on to score twice more before Altidore scored a consolation goal.