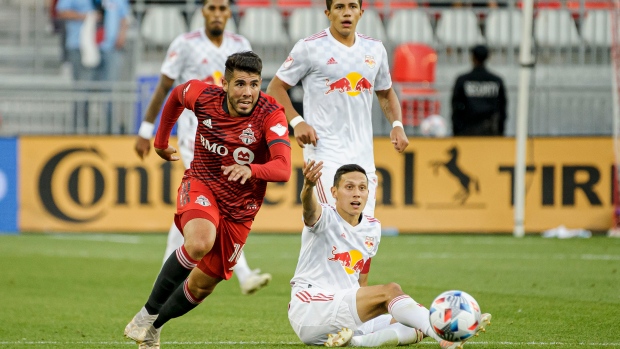 TORONTO -- It's been a difficult year on and off the field for Toronto FC's Alejandro Pozuelo.

Frustrated by injury since the pre-season, the reigning MLS MVP has appeared in just 14 of the club's 29 league games this season. Last year he didn't miss a start.

The 30-year-old Spanish playmaker had nine goals and 10 assists in 2020. This season he has one goal and four assists.

"A difficult year," he said in a virtual availability Monday ahead of Toronto's game Wednesday against Inter Miami in Fort Lauderdale, Fla. "Not only personally but with the team when we had to go to Orlando (to relocate due to the pandemic)."

A leg injury during training camp sidelined him for the first 10 games of the season in all competitions, with Pozuelo returning to action May 29. He was injured again in late August and didn't see action until Saturday, when he came of the bench in the 2-0 loss to visiting Atlanta United.

Pozuelo says the latest injury involved the same leg as the earlier one but not in the same spot.

"Close to the old one, but it's different," he said. "This is why we needed to take a little bit more time, to not take any risks ... Now everything is good."

Pozuelo, who returned to Spain during the June international break for the birth of his third son, did not elaborate on what he called a "personal family problem."

"I try to keep my problem to myself," he said in English. "I don't want to talk too much in the press on this situation. Sorry about that."

Saturday's loss officially eliminated Toronto (6-16-7) from playoff contention. While the team has five league games remaining, the focus shifts to the Nov. 3 Canadian Championship semifinal against Pacific FC -- a tournament that represents TFC's last chance to make something out of the season.

"It's important for the club, for the people here in Canada -- the cup -- so I prepare for this and for sure for next year, 100 per cent," Pozuelo said.

In other news, the club has made a formal request to the league, asking that Brazilian fullback Auro's red card from the Atlanta game be rescinded. General manager Ali Curtis said the situation is being reviewed by the Independent Review Panel.

Auro and Atlanta's Ezequiel Barco were both ejected in the 84th minute for violent conduct. The two clashed after Auro took offence at the way the Argentine went down in a challenge.

While the two players jawed at each other standing forehead-to-forehead, both coaches said after the game they didn't think the ejections were warranted. With TFC scheduled to fly south Tuesday afternoon, the hope is the review will be completed by then so Auro can travel if the card is rescinded.

The league may also want to review the skirmish at the BMO Field player tunnel that ensued as Auro and Barco left the field, with players, staff and security meeting in a messy, ill-tempered scrum.

Toronto coach Javier Perez reiterated Monday that he blamed some of Atlanta's staff for escalating the situation.

"Whatever is on the field stays on the field ... The fact that we saw several (staff) members of Atlanta involved in the incident looked to me unprofessional and I completely disapprove of what happened there."

Perez also confirmed that Jahkeele Marshall-Rutty will start against Miami. The 17-year-old replaced injured forward Ifunanyachi Achara in the 31st minute, only to be pulled himself in the 61st to accommodate Pozuelo. Perez said it was a tactical switch.

Perez said that while Achara's injury is "mild," it may keep him out of the next two to three games. Centre back Chris Mavinga, who has not played since Sept. 25 due to injury, is back training with the team and is in consideration to travel.