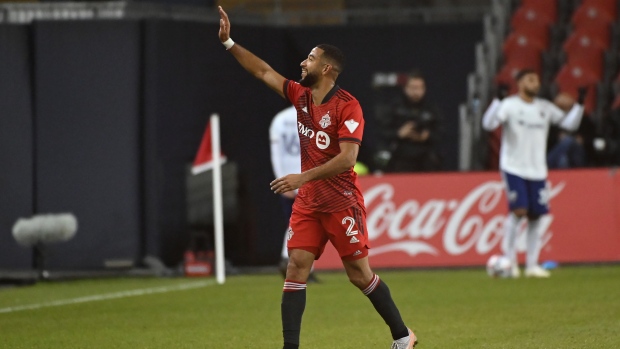 Toronto FC's Justin Morrow acknowledges the crowd as he leaves the pitch for the last time, retiring following the game against D.C. United' in MLS soccer action in Toronto on Sunday, Nov. 7, 2021. THE CANADIAN PRESS/Jon Blacker

TORONTO - After playing his final MLS game, veteran fullback Justin Morrow said he was stepping aside because it was “time for the next generation.”

Just how much turnover there will be at Toronto FC in the off-season remains to be seen. But Sunday's regular-season finale - a 3-1 loss to D.C. United - was a reminder that plenty needs to be fixed.

Toronto (6-18-10) and the 34-year-old Morrow still have the Canadian Championship final to play against CF Montreal, with date and venue yet to be determined. But the franchise has more than three months to ponder what went wrong this season ahead of the Feb. 26 kickoff of the 2022 campaign.

Sunday's game had several of the hallmarks of TFC's forgettable season - slack defending and an early goal conceded, an inconsistent attack and a long line of unavailable players. And the difference-makers didn't make a difference, with striker Jozy Altidore one of three halftime substitutions. The burly striker, who was said to be feeling discomfort in his groin, had just eight touches in his 45 minutes.

Toronto came on late but the die was cast.

Ola Kamara scored twice for D.C., increasing his season total to a career-high 19, while Julian Gressel had two assists to raise his number to 14 on the season. Steven Birnbaum also scored for D.C.

Richie Laryea had the Toronto goal.

D.C. (14-15-5) needed a win and help from others - the Red Bulls to lose at Nashville SC and Montreal to lose or tie against visiting Orlando - to secure an Eastern Conference playoff berth on the final day of regular-season play.

The Red Bulls did not co-operate, tying Nashville 1-1. D.C. moved up one place to eighth, but remained one point below the playoff line.

Six points behind the Chicago Fire, Toronto was destined to finish 13th in the 14-team East no matter what happened. Toronto, second in the Supporters' Shield standings last season, started Decision Day 26th overall in the 28-team league.

The sun was out for the regular-season finale, with the temperature a balmy 15 C at the lakefront.

Toronto fell behind in the 13th minute when Birnbaum beat the defence to power a header past Quentin Westberg off a fine Gressel corner. It was the 15th goal Toronto has conceded in the first 15 minutes of play this season, worst in the league.

Laryea tied it up in the 18th minute with a long-range shot that found the corner after a nice Toronto setup.

Kamara restored D.C.'s lead from the penalty spot in the 30th minute lead after Westberg took him down in the penalty box. It was the ninth goal of the season via penalty for the Norwegian international.

Kamara made it 3-1 in the 36th, redirecting Gressel's shot via a flick of his boot after a well-worked short corner that featured a nifty backheel from Paul Arriola to Gressel that took two defenders out of the play. Gressel then worked his way around Michael Bradley to make space for the shot.

Interim Toronto FC coach Javier Perez said it was a game that came down to three set pieces - two corners and a penalty.

“When you are not sharp on set pieces, you get (goals),” he said.

The Spaniard also said he treated the contest as a test ahead of the Canadian Championship final.

“We had a few things to try and obviously in the first half it didn't go well â€¦ We feel like we were more in control of the game at the end.”

Morrow led the team out as captain in his MLS swan song. The Ohio native was making his 254th appearance for the club in all competitions, second only to Jonathan Osorio's 291.

Wife Jimena and daughters Chiara and Lucia were on hand as Morrow walked out. There was a video tribute and the presentation of a framed jersey.

The South Stand fans honoured him with a giant tifo saying “Some heroes wear cleats.”

Morrow came off in the second-half stoppage time to a standing ovation from the announced crowd of 11,166. Perez told him it had been a pleasure and an honour to be his coach.

After the final whistle, Morrow went to the south stand to thank the fans.

Asked about his emotions, Morrow said: “A little bit of everything. Mostly it's joy. I'm the only happy guy in the locker-room today.”

Morrow, who serves as executive director of Black Players for Change, says he knows his next career move but is not willing to share it yet.

He paid tribute to TFC for making his final MLS game special.

“This club has just been my life for eight years. They always go beyond. They did again today, taking care of my family â€¦ Just a really nice day for me,” he added.

It marked Morrow's ninth start this season - and the 267th of his MLS career including the playoffs. He spent four seasons with San Jose before joining Toronto in December 2013 for some US$100,000 in allocation money.

TFC came into the game winless in its last five league outings (0-2-3) but had taken points off playoff contenders in ties with Montreal, Philadelphia and Atlanta.

D.C. United was coming off a 3-1 loss to Columbus and had only won one of its last six outings (1-4-1). But unlike Toronto, which beat Pacific FC midweek in the Canadian Championship semifinal, it had a full week to prepare.

D.C. United had a part to play in TFC's season. A 7-1 humiliation at Audi Field on July 3 was the nadir of Toronto's campaign.

Perez, the assistant coach elevated to the top job the remainder of the season, was 5-9-8 at the Toronto helm coming into Sunday's match. TFC was eliminated from playoff contention Oct. 16 in a 2-0 loss to Atlanta with give games remaining in the regular season.

Toronto, which had to deal with a pre-season COVID outbreak, played the first 16 games of the season in all competitions away from home after relocating to Orlando due to pandemic-related travel issues. It did not play at BMO Field until July 17.

TFC finished the season 3-4-7 in league play at BMO Field this year.

Perez made four changes to his midweek starting 11 with Morrow, Mavinga, Marshall-Rutty and Ifunanyachi Achara slotting in.

This report by The Canadian Press was first published Nov. 7, 2021