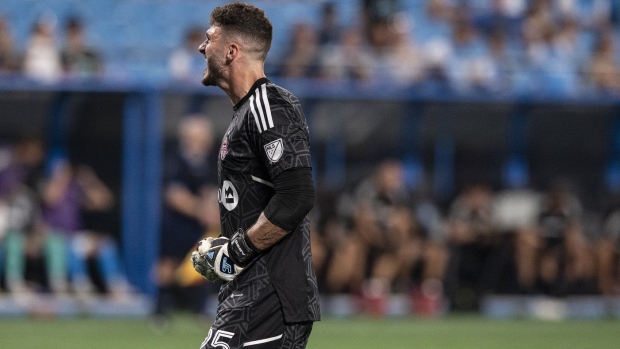 There are also question marks over whether Canadian international midfielder Jonathan Osorio and veteran centre back Chris Mavinga will be back.

Toronto declined the contract option on the 31-year-old Mavinga, a French-born Congolese international who joined the club prior to the 2017 season, but said it remains in talks about a potential new deal. The club is also in discussions with Osorio, whose contract expires at the end of the year.

Osorio, speaking to media Wednesday at the club's end-of-season availability, said: “Everything's an option at this point.”

“Should a good opportunity present itself overseas, if it's the best option, then I will take it. For me it's about taking the best option. It's not about going to Europe because I dreamt about it. It's about now I think I'm at the point of my career where it has to be the right move.”

Bono, Westberg and Okello are also out of contract at the end of the year. Henry remains under contract with MLS after Los Angeles FC waived him in July and the Canadian international will be eligible to go through waivers again.

Toronto (9-18-7) finished out of the playoffs in 13th spot in the Eastern Conference for the second year in a row.

Asked Wednesday if it's fair to say that the club is looking for help in goal, central defence and striker, head coach Bob Bradley replied “That's very fair. Very fair.”

Bono and Westberg made a combined US$870,583 this season, with the club allowing 66 goals to tie a franchise record.

“Look, the easiest thing to say about our season is we gave up too many goals,” Bradley, who doubles as Toronto's sporting director, said Wednesday.

Bradley has acknowledged that the blame for that is not exclusively on the goalkeepers. TFC shot itself in the foot with costly turnovers all over the field, often resulting in defenders chasing attackers as they headed toward goal towards an unprotected 'keeper.

Osorio, who made $1.026 million this season, leads the club with 318 appearances in all competitions and is tied for third in scoring with 58 goals. The 28-year-old Bono ranks seventh with 157 appearances and is the franchise leader in goalkeeper wins (67) and shutouts (35).

The 36-year-old Westberg, who finished the season as the No. 1, is third in the club record book in goalkeeper wins (28) and fourth in clean sheets (11).

Bono, taken sixth overall in the 2015 MLS SuperDraft, and Westberg have vied for the starting position since Westberg joined the club prior to the 2019 season.

“I came to Toronto as a boy. Raw, naive, but ready to work as hard as was necessary to become who I wanted to be. Eight seasons later, my journey in this incredible city has, for now, come to an end,” he wrote.

The only first team 'keeper still under contract is 29-year-old Greg Ranjitsingh, who has yet to see action for Toronto.

Mavinga ranks eighth on the club list with 153 appearances in all competitions. Another big-ticket item at $1.037 million, Mavinga is an athletic defender whose game can be marred by errors.

Achara missed almost all of his rookie 2020 season with a knee injury. He appeared in 29 league games the last two seasons with two goals and two assists.

The 22-year-old Okello was limited to eight league appearances this season due to injury. Henry arrived in July for his second stint with the club.

There are 21 TFC players currently contractually guaranteed for the 2023 season, including Italians Lorenzo Insigne, Federico Bernardeschi and Domenico Criscito, who arrived midway through the 2022 campaign.

Toronto has a designated player slot open and Bradley said the hope is the club, unlike last season, can fill holes prior to training camp to allow for “starting the season in as strong a way as possible.”

Fullback Richie Laryea's loan from England's Nottingham Forest runs through June 2023. Winger Jacob Shaffelburg is on loan with Nashville SC until the end of the 2022 season, with an option for Nashville to make the move permanent.

Toronto has until Nov. 14 to act on the 2023 contract option for Brazilian fullback Auro, currently on loan to Santos FC in Brazil.

Some 20 first team players left the club after a 6-18-10 season in 2021. Designated players Alejandro Pozuelo (traded to Miami) and Carlos Salcedo (returned to Mexico) exited during the 2022 season with midfielder Ralph Priso sent to Colorado in the deal that brought Canadian midfielder Mark-Anthony Kaye to Toronto.

This report by The Canadian Press was first published Oct. 14, 2022