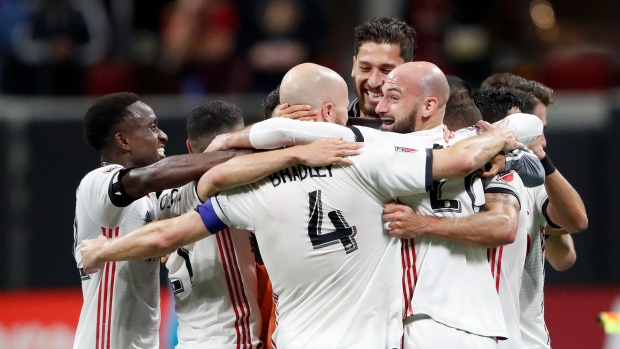 ATLANTA - Toronto FC's season has been a slow boil. But Greg Vanney's team is getting hot at the right time.

And in reaching the MLS Cup for the third time in four years, Toronto is renewing acquaintances with an old foe in the Seattle Sounders. But to get its hands on the Philip F. Anschutz Trophy again, it will have to do it the hard way - with a third straight win on enemy turf.

“We're definitely on a mission,” said goalkeeper Quentin Westberg. “Determination is the key word in these playoffs for us.”

Toronto showed that resolve in staving off a talented Atlanta United FC team in the Eastern Conference final Wednesday before a loud crowd of 44,055 under the dome at Mercedes-Benz Stadium.

Trailing early, it eventually weathered the storm and found its bearings before scoring a peach of a 78th-minute goal through Nick DeLeon for a hard-fought 2-1 win over the reigning MLS champions.

Vanney saw the game as a microcosm for his team's season.

“Early in the year we battled. We went through mid-season, kept our head above water, got our team back together and have been on a run,” he said. “And tonight, look it was similar. We were missing a couple of guys. But the group of guys that were out there, nobody outside of our club thought could maybe get it done. Except for our fans and us.

“And like true champions, (we) just found a way tonight to get it done. (We) played with heart, played with grit, played with real character, resilience, made plays ... and then scored two incredible goals. Look sometimes on the road in a one-off game, you've just got to come up with ways. That's what great teams do.”

Replacements other than the sublime Spaniard Alejandro Pozuelo were slow to arrive.

But as players returned from the Gold Cup in early July, Toronto gradually came together. The arrival of centre back Omar Gonzalez from Mexico also provided some defensive glue.

Toronto has lost just twice in 18 regular-season and playoff games (10-2-6) since the Gold Cup. And it goes to the Nov. 10 championship game undefeated in its last 13 league outings (7-0-6). Toronto has not lost in league play since a 2-0 defeat Aug. 3 at the New York Red Bulls.

“It's a long season and we always felt like if we could keep ourselves going, if we could get through the summer months, get through the Gold Cup and then get our full group back together, that we'd have a real chance to put it all together in the second half of the season,” said captain Michael Bradley.

Bradley's future remains up in the air. His contract expires at the end of the season with both skipper and club opting to keep the subject under wraps. GM Ali Curtis has declined comment on a report that an option year at US$6.5 million will kick in if Toronto wins the title.

Standing in the way is Seattle, fresh from knocking off league-leading Los Angeles FC on the road. The Sounders have won five straight and lost just twice in their last 12 matches (8-2-2).

Toronto lost to the Sounders in a penalty shootout in 2016, avenging that loss with a 2-0 win in the 2017 championship game. Both matches were at BMO Field.

The teams played just once this season with Toronto losing 3-2 on April 13 in Seattle in Westberg's debut in the TFC goal. It marked Toronto's first loss of the season, in its fifth game.

Jozy Altidore scored both Toronto goals on Pozuelo set-ups. Toronto had its chances late to tie the game but Frei made a diving save and TFC defender Laurent Ciman hit the goalpost with a booming shot.

With 10 days before the championship game at CenturyLink Field, Altidore (quad) and Gonzalez (hamstring) have more time to recover.

The Toronto front office, maligned for its tardiness in filling some roster holes, deserves some belated credit.

Wednesday's win, while a team effort, was driven by newcomers in DeLeon, Westberg and Nicolas Benezet, who scored the tying goal.

Other first-year TFC players also came up big. Ciman continued his excellent play in relief of Gonzalez. Fullback Richie Laryea came on in the second half to help steady the ship.

Toronto has traditionally been the rich kid on the MLS block, with everything a soccer player or coach could want. But while it left points on the table this season with 11 ties, it showed its ruthless side Wednesday in resorting to a bodycheck or grab if needed to snuff out an attack.

“We controlled, I think, 95 per cent of the whole game,” Atlanta manager Frank de Boer said after the game.

“I spoke to (Vanney) also and he said we didn't deserve it,” he added. “But they're in the final and we're not. That's harsh again. But that's sport and that's also the beauty of sport. And it's part of life.”

Vanney had a slightly different interpretation of the conversation.

“What I said to him was that basically we didn't play well. We didn't play our best soccer on the night,” he said.

But Toronto got the job done, he added.

“From a soccer perspective we probably didn't win very many categories except for one, which was the 2-1 on the scoreboard. So it would be disrespectful to my team to say they didn't deserve it. Because they did. But we didn't play our best soccer and that's for sure. From a soccer perspective, they were a better team tonight.”

But not the winning team.

This report by The Canadian Press was first published Oct. 31, 2019.