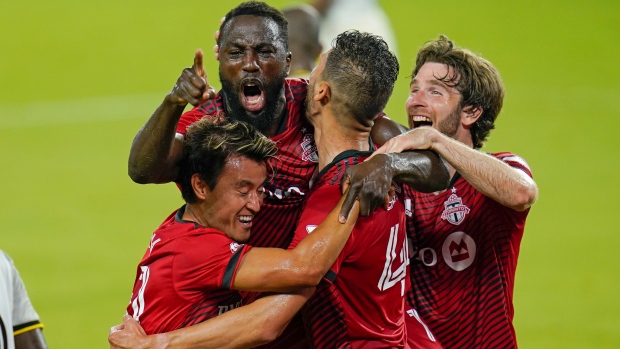 Toronto FC forward Jozy Altidore, center, celebrates after scoring a goal against the Columbus Crew with teammates from left, forward Tsubasa Endoh, defender Omar Gonzalez and forward Patrick Mullins during the second half of an MLS soccer match, Wednesday, May 12, 2021, in Orlando, Fla. (AP Photo/John Raoux)

Fresh from its first clean sheet of the season, Toronto FC faces Major League Soccer's leading offence on Saturday when it takes on New York City FC at Yankee Stadium.

NYCFC (2-1-1) is unbeaten in its last three games (2-0-1), outscoring the opposition 8-1 over that stretch. Thanks in large part to a 5-0 demolition of FC Cincinnati, the New Yorkers lead the league in scoring, averaging 2.25 goals a game.

"It's one of these opponents, you know them on paper but it's much more difficult when you play against them," said Toronto coach Chris Armas. "They're off to a good start, they've got some goals off set pieces. They're dangerous. They're a good team. And they're defending well, as well."

The New Yorkers are led by Argentine striker Valentin (Taty) Castellanos, who is on a record scoring pace.

The 22-year-old Argentine is the fifth different MLS player to score at least one goal over the first four games of a season. The record is held by former U.S. international Brian McBride, who had goals in the first five games of the 1998 season.

On Thursday, Castellanos was rewarded with a new contract that runs through 2025. Castellanos has 22 goals and 11 assists in 64 MLS appearances for NYCFC.

The Argentine has launched 21 shots this season, compared to 40 for TFC in total.

Both teams have had to deal with injuries.

Toronto is without designated player Alejandro Pozuelo and veteran fullback Justin Morrow, who are both dealing with thigh issues. Forward Ifunanyachi Achara (knee) and winger Erickson Gallardo (groin) are recovering from surgery.

Jonathan Osorio (thigh) is listed as questionable, with Armas suggesting he won't rush the Canadian midfielder back given his importance to the team.

Moralez and Morales both missed last weekend's game in Orlando.

TFC's win over Columbus was a tonic after earning just one point from the first three games of the season. Newly signed Venezuelan international Yeferson Soteldo made his first start and fellow designated player Jozy Altidore, recovering from a bout of illness, scored off the bench.

Goalkeeper Alex Bono said of the post-game feeling: "This is the way it's supposed to be."

"Everyone was excited, Everyone had that feeling of 'OK, like that's the kick-starter right there.' We'll look to build off that on the weekend and for the rest of the season now."

The tight confines of Yankee Stadium remain an issue.

"Things are coming quicker. Throw-ins, corner kicks, every set piece. Every foul past midfield is closer to your (penalty) box," said Armas.

Bono says the angled layout of the field within the baseball stadium also presents problems.

"Sometimes I'm looking down the field and I'm looking at my position and saying 'Wait a second, I'm 10 yards too far to one side,"' he said. "It takes a little more focus with working on your positioning and knowing where you are on the field."

Toronto's pressing style under Armas could pay dividends on the smaller pitch.

Soteldo may benefit, given his excellent close ball control. After just 98 minutes on the pitch over the last two games, he is already getting rave reviews.

"I tell you what, that guy can play," said Bono. "He is rapid, with and without the ball. Quick feet He's going to be a handful for a lot of teams in this league."

Added Armas: "We like everything we see so far."

With this being TFC's third game in a week, Armas says he will rotate his roster "because we feel like we're getting deeper by the day."

Newly acquired striker Dom Dwyer is available Saturday. Jamaican international fullback/wingback Kemar Lawrence, who made his debut off the bench against Columbus, could get his first start.

OFFENCE: Castellanos (four) and Jesus Medina (three) have accounted for seven of NYCFC's nine goals this season with an own goal and Gudmundur Thorarinsson taking care of the other two. Toronto's six goals have come from six different players.

BRONX FORTRESS: NYCFC has won 11 of its last 13 games at Yankee Stadium and has only lost three regular-season matches there dating back to the start of 2018. Still, the New Yorkers' last home win over TFC was in June 2018. Toronto is 1-2-4 all-time at NYCFC in regular-season play.