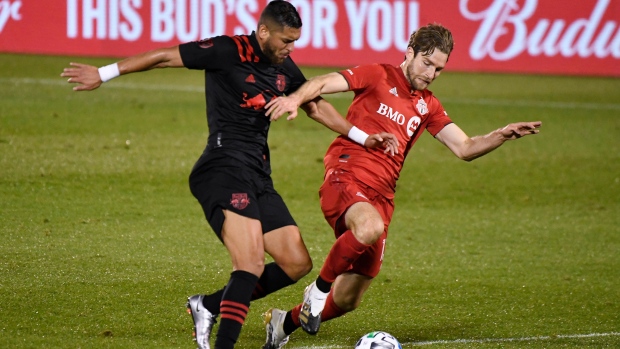 Looking to match a club record with a sixth straight win, Toronto (11-2-5) instead had to settle for a single point in a 1-1 tie with the New York Red Bulls thanks to a spectacular 77th-minute strike from 17-year-old substitute Caden Clark.

Clark marked his MLS debut on the weekend with a spectacular volley off a corner against Atlanta just hours after signing a first-team contract. He did it again Wednesday, finding the top corner with his a left-footed rocket from outside the penalty box.

“I wish I had made the save but sometimes also you need to appreciate the game and great goals being scored,” said Toronto goalkeeper Quentin Westberg. “I think tonight this young guy had a banger. So congrats to him. It's just unfortunate that it happened against us, but in the end I love soccer. And when I look back, I think it's a beautiful goal.”

Alejandro Pozuelo had put Toronto ahead with a 23rd-minute penalty.

Introduced in the 59th minute, Clark added immediate punch to the New York offence against a Toronto team playing its fourth game in 12 days -- and on just two days rest.

The Minnesota native was already the fifth-youngest MLS player to score on debut. He is now the youngest player in MLS history to score in his first two appearances.

“It's awesome... I think that's very very cool that I did that,” said Clark. “But we've got bigger things to worry about for next game.”

Red Bulls captain Tim Parker, a former Vancouver Whitecap, had some fun with his teenage teammate after the game, tweeting: “Big result! But instead of hyping â†•iamcadenclark for his goal, let's encourage him to do his homework.”

“It's a kid playing high right now. High on life and high on the energy of making his debut,” said interim Red Bulls coach Bradley Carnell.

Clark credited teammate Marc Rzatkowski for getting the ball to him.

“Everything was kind of set up for it,” he said of the goal. “It wasn't bad.”

Toronto had chances to nip the scoring chance in the bud. The Red Bulls got the ball after Parker got the better of Pozuelo in a midfield duel. And Toronto midfielder Marky Delgado had a chance to foul Clark before the shot but opted not to.

The Red Bulls (7-8-3) were coming off a 1-0 win Saturday in Atlanta that snapped a two-game losing streak.

“If I'm being honest, I was concerned about this game,” said Toronto coach Greg Vanney. “We've been on a great run. It's short rest. They're a team coming off of one day extra of rest. There were a number of things that concerned me a little bit about this game.”

Pozuelo scored from the penalty spot after Ayo Akinola's rising shot off a corner hit Dru Yearwood's arm. It was the eighth goal of the season for Pozuelo. Goalkeeper Ryan Meara stood rooted to the spot as Pozuelo, who upped his career MLS penalty success rate to 10-of-11, rolled the ball into the corner of goal.

The Spaniard missed one-of-two spot kicks in a 1-1 tie against NYCFC at Yankee Stadium last September. A failed attempt to pass the ball from the penalty spot to teammate Pablo Piatti in a 1-0 loss to Montreal earlier this season apparently is not considered an attempt.

Yearwood appeared to have redeemed himself in the 32nd minute with a shot through traffic that went in from a corner. But a Red Bull player was ruled to be offside and interfering with Westberg.

Pozuelo had chances for more goals at Pratt and Whitney Stadium at Rentschler Field but his shots hit bodies, went wide or were saved.

The two teams will meet again in the regular-season finale Nov. 8 at Red Bull Arena.

Vanney made four changes from his weekend lineup in Cincinnati, bringing back Chris Mavinga, Nick DeLeon, Piatti and Akinola.

Newly signed homegrown player Ralph Priso made the bench. The 18-year-old midfielder from Toronto, a Canada under-17 youth international who joined the Toronto academy in January 2017, wore No. 97. He is the 25th player to sign for the first team from the academy.