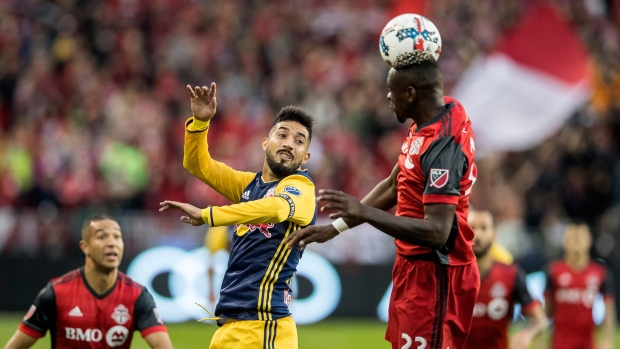 Toronto FC nailed down a key part of its defence Thursday, signing centre back Chris Mavinga to a contract extension.

The 28-year-old Mavinga and U.S. international Omar Gonzalez have become the first-choice centre-back pairing for TFC. They represent the heart of the Toronto defence, a marquee pairing with a price to match.

Mavinga made US$663,300 last season, sixth-highest on the Toronto books. Gonzalez, a former MLS Defender of the Year, was fourth-highest at $1,193,900. Gonzalez's deal involves targeted allocation money.

Mavinga's existing contract expires at the end of the 2020 season. The French-born Congolese international, who joined Toronto in January 2017, had teased the new deal in a Jan. 2 tweet saying "Something BIG is coming." On Wednesday, he posted "Here to stay."

"Chris is a player that has played a significant role in the success of the club over the past three years," Toronto GM Ali Curtis said in a statement. "He has excellent tools for the position -- left-footed, excellent speed and loves competing in the biggest games.

"We are excited that Chris chose to extend his contract, and that he will be with the organization moving forward."

Mavinga, who has made 86 appearances in all competitions for Toronto, is a rangy, athletic defender fast enough to rescue most defensive miscues. Coach Greg Vanney, a former elite defender himself, has called him the team's "safety blanket."

Mavinga's soccer journey took him from France to England, Belgium and Russia before finding a home in Canada.

Mavinga, whose father is Congolese, started in the Paris Saint-Germain system at 14, working his way up to train with the first team at 17. But a coaching change blocked his path so, rather than return to the reserves, he left for Liverpool at 18 -- spurning an offer from Arsenal.

He did well in the Liverpool reserves and, playing alongside Antoine Griezmann, Alexandre Lacazette and Francis Coquelin, helped France win the under-19 European title in 2009-10.

After manager Rafa Benitez left Liverpool, he was loaned to Belgium's Genk and found himself making headlines for all the wrong reasons in 2011 in a title-deciding game in the season finale.

Chasing a high-bouncing ball down the flank, he went to kick it while Standard Liege's Mehdi Carcela-Gonzalez bent down to try to get his head to it. Mavinga's boot caught Carcela-Gonzalez flush in the face. The Moroccan, who was knocked out on the play, suffered facial fractures and a concussion.

Genk went on to win the game -- and the title. While his teammates celebrated, Mavinga cried.

"This night was terrible for me," he said.

He left Genk for France's Rennes where he played regularly and saw Europa League action. In 2013, he moved to Russia in an ill-fated big-money move to Rubin Kazan. The team changed coaches and eventually loaned him to France's Reims and Troyes.

Returning to Russia, he went six months without a game and told his agent he wanted "something different." It came in the form of a call from Toronto, ahead of interest from Montreal.

His arrival was anything but smooth, however. He was sick when he arrived in training camp and found himself going back and forth to France to be with his pregnant partner.

He lasted just 51 minutes in his first start, a 2-2 draw with visiting Atlanta in April 2017 that saw him chasing both goals. A groin injury further delayed his return. But now he is a fixture in the heart of defence.

This report by The Canadian Press was first published Jan. 9, 2020.