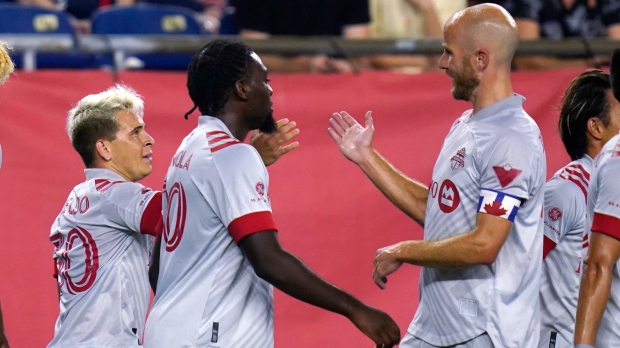 Toronto FC midfielder Yeferson Soteldo, left, is congratulated by midfielder Michael Bradley, right, after his goal in the first half of an MLS soccer match against the New England Revolution, Wednesday, July 7, 2021, in Foxborough, Mass. At center is Toronto FC forward Ayo Akinola. (AP Photo/Charles Krupa)

FOXBOROUGH, Mass. - Yeferson Soteldo and Kemar Lawrence scored their first goals for Toronto FC, helping the slumping MLS side snap a six-game losing streak with a hard-fought 3-2 win over the New England Revolution on Wednesday.

Tsubasa Endoh also scored for Toronto (2-8-2), recording his first goal of the season. Carles Gil and Adam Buksa replied for New England (7-3-3), with Buksa's 78th-minute header making for a tense finale as the Revs rallied from a 3-0 early deficit.

New England piled on the pressure with a string of late corners but TFC hung on through six minutes of added time. Toronto goalkeeper Alex Bono preserved the win with a 95th-minute stop.

Assistant coach Javier Perez was in charge of Toronto, which fired first-year coach Chris Armas in the wake of Saturday's 7-1 loss at D.C. United. It represented the heaviest defeat in club history.

Wednesday's wide-open game featured two teams at different ends of the Eastern Conference. Toronto came into the contest mired in the league basement and winless in seven. It was 19 points behind New England at kickoff and ranked last in the 27-team league on defence, conceding 2.45 goals a game.

Toronto's only other league win this season was May 12, a 2-0 victory over defending champion Columbus.

New England, which came into the game the only MLS side yet to drop points at home this season, was looking to tie a club record with an eighth straight home win. The Revs had not lost at home since dropping a 2-1 decision to Philadelphia on Oct. 19.

But it was TFC that raced into the lead in a contest delayed nearly 90 minutes due to lightning strikes in the vicinity of Gillette Stadium. With captain Michael Bradley, Alejandro Pozuelo and Soteldo pulling the strings and moving the ball quickly, Toronto repeatedly cut New England open.

Pozuelo, TFC's Spanish playmaker and Soteldo, a Venezuelan international winger, were starting together for the first time after a stop-and-start season due to injury.

Down 3-0 after 21 minutes Saturday, Toronto led by the same score after 24 minutes Wednesday.

With New England No. 1 'keeper Matt Turner away with the U.S. at the Gold Cup, 36-year-old Brad Knighton made his first league appearance since March 7, 2020. Nine minutes into the game, the former Vancouver Whitecap was picking the ball out of his goal.

Brazilian fullback Auro sent in a long ball towards the New England penalty box aimed at Soteldo. Knighton waited for the ball to enter the box so he could handle it, with defender Brandon Bye getting out of his way. But the ball died on the artificial turf and never made it to Knighton, who was rooted just inside the box. Soteldo got to it first, dribbled past Knighton and slotted it into the empty net to open his MLS account.

Six minutes later, the Revs' defence was nowhere to be found. Pozuelo found an unmarked Lawrence and the Jamaican international hammered a left-footed shot past Knighton from close range.

Knighton had no chance in the 24th minute when Endoh, after a feed from Soteldo, made room to curl a beautiful left-footed shot from just outside the penalty box into the corner of the goal.

The Revs came close as the first half wore on with Buksa and Gustavo Bou, who had scored in his five previous games, both hitting the post. Bye, alone in front of goal, skied his shot late in the half.

Pozuelo scored in stoppage time but the goal was called off due to offside. The Revs headed to the dressing room to a chorus of boos.

Gil gave the crowd something to cheer about in the 56th minute, beating Bono with a superb free kick from outside the box. It was the second goal of the season for the Spaniard, who leads the league with 10 assists.

Perez, a 44-year-old Spaniard who joined Toronto's staff in February, made six changes to the team thumped by D.C. United, several by necessity.

Toronto was missing injured goalkeeper Quentin Westberg (finger) and fullback Justin Morrow (back). Centre back Eriq Zavaleta was suspended after being sent off in the D.C. debacle. Midfielder Jonathan Osorio and fullback/wingback Richie Laryea are away with Canada preparing for the Gold Cup.

Defender Chris Mavinga, normally a fixture at centre back, did not dress. A club spokeswoman said it was a “precautionary” move.

Star striker Jozy Altidore, who has not played since May 22, remains on the outs with the club.

New England was also without Canadian midfielder Tajon Buchanan, also away at the Gold Cup where Canada opens Sunday against Martinique.

Toronto is now undefeated in its last six meetings (3-0-3) with New England dating back to September 2018. Still the Revs hold a 10-4-5 edge over TFC at Foxborough.

Toronto does not play again until July 17. Club management has not said who will be in charge then.

This report by The Canadian Press was first published July 7, 2021.