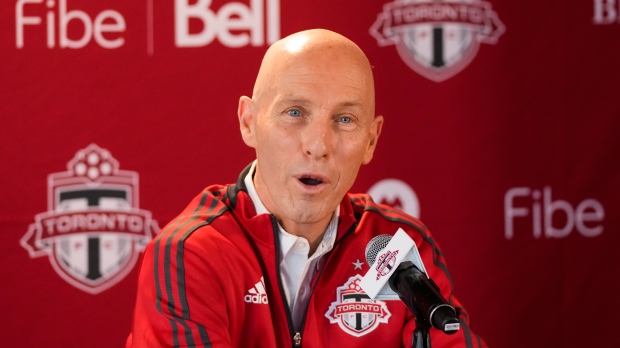 A shakeup in defence was not unexpected given Toronto gave up a franchise-worst 66 goals during a dismal 6-18-10 MLS campaign. As the season wore on, TFC was reduced to using captain Michael Bradley in the backline.

“You're not going to win many games when you're letting in two goals a game,” team president Bill Manning said in his end-of-season media session last week.

Toronto, which appointed Bradley as head coach and sporting director last week, also opted not to exercise options on veteran backup forward Patrick Mullins, third-string goalkeeper Kevin Silva and 21-year-old defender Rocco Romeo, who had yet to make a league appearance for the team.

Manning had promised “some pretty significant changes” in personnel.

“Yes, I think this roster is going to have some makeover,” he said last week. “Bob (Bradley) is going to come in and he's going to put his stamp on this team. At this point, I do think that we need this injection of new blood and to kind of raise the bar again for our club.”

Defender Julian Dunn, midfielders Liam Fraser, Nick DeLeon, Tsubasa Endoh and forwards Erickson Gallardo and Ayo Akinola will be out of contract at the end of the year.

Bigger questions remain to be answered. The future of star forward Jozy Altidore is up in the air after a season marred by injury and a dispute with former coach Chris Armas that kept him on the outs with the club for some two months.

There is also a question mark over fellow designated player Yeferson Soteldo, with speculation the Venezuelan is not happy at the club. Spanish playmaker Alejandro Pozuelo says he is committed to the club, despite his own injury-interrupted season.

The three DPs, whose salaries totalled US$10.26 million this season, combined for eight goals and 14 assists in league play with Soteldo leading the way at three goals and 10 assists.

The 33-year-old Gonzalez was one-half of Toronto's first-choice centre back pairing with Chris Mavinga. Both had up-and-down seasons with the six-foot-five Gonzalez's lack of mobility a liability at times.

A three-time MLS champion, Gonzalez is a former MLS rookie and defender of the year.

Zavaleta was out-of-contract after the 2020 season but re-signed with the club. The American-born El Salvador international, who ranks seventh in club ranks with 152 appearances in all competitions, made 14 league appearances this year.

Akinola is recovering from knee surgery in the wake of a July injury with Canada but the 21-year-old has shown star quality when healthy. Endoh and Gallardo have also been sidelined by injury.

Gallardo joined the team in July 2019 but has made just 10 league appearances, including six starts. The Venezuelan winger has been a mystery man.

Fraser, a Canadian international, was loaned out to Columbus in May. The 21-year-old Dunn is a homegrown defender who made one league appearance this year.

DeLeon, a veteran midfielder who spent the last three seasons in Toronto, has made no secret of the fact he wants to return to the U.S. to be near his family. And unless he has a change in heart, his unvaccinated status will make border crossing complicated.

Veteran fullback Justin Morrow has retired and is expected to join the Toronto front office.

This report by The Canadian Press was first published Dec. 1, 2021