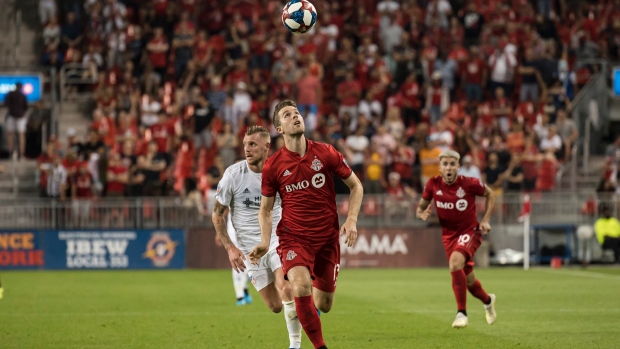 CINCINNATI - A game lacking in drama for 90 minutes came alive in stoppage time Sunday with league-leading Toronto FC clinching a playoff spot after hanging on for a 1-0 win over slumping FC Cincinnati.

In recording its fifth straight victory, Toronto (11-2-4) had to survive a 94th-minute penalty call by referee Robert Sibiga who judged Omar Gonzalez had pushed substitute Allan Cruz to the ground as a cross dropped into the Toronto penalty box. Sibiga pointed to the penalty spot but changed the call in the 96th minute after video review.

“That shouldn't be a foul on us,” he said. “But it was a little fuzzy there for a few minutes, for sure.”

Cincinnati coach Jaap Stam was not happy with the penalty reversal, noting Sibiga was 10 yards from the play and had a good view.

“If it was for like one of the big teams in the league, they would have had a penalty,” he said. “But for some reason we don't get it. And I think it was (a penalty). So It's a strange decision.”

Seconds after the penalty reversal, Toronto substitute Laurent Ciman almost sent a long back pass into his own goal, a play Vanney dismissed as “nonsense.”

“We should have had more out of this game unfortunately,” said Stam. “But that's the position where we are now. We need to make our own luck. We need to work hard for it. Nobody's going to give it to us.”

They were rare moments of excitement in a game that was short on goal-scoring chances but still produced another three points for TFC. Toronto managed just two shots on target to one for Cincinnati.

Patrick Mullins broke the deadlock in the 29th minute after Richie Laryea squared the ball back from the byline through a mass of bodies. Mullins, with the game's first shot on target, beat goalkeeper PrzemysÅ‚aw Tyton with a right-footed shot for his first league goal since a 5-1 win in Cincinnati on Sept. 7, 2019.

Alejandro Pozuelo picked up his 10th assist of the season on the play.

In only his second start of the season, Mullins showed his predatory skills in finding the space in the crowded box needed to get the shot off.

Vanney's club is the first to book its post-season ticket this season.

“The guys are proud of it but they have their eyes on something a little bit bigger over this stretch,” he said. referencing the Supporters' Shield that goes to the team that finishes atop the regular-season standings.

Toronto striker Ayo Akinola, who was introduced in the second half Sunday, has eight goals -- matching Cincinnati's entire output this season.

Cincinnati had a far stronger second half after Stam brought on Kamohelo Mokotjo and Siem de Jong at the interval. Possession was virtually even by the final whistle.

“We bent a little bit throughout the game but we never broke,” said Vanney.

Ciman's strange night included a yellow card for dissent while on the bench. Cincinnati lost defender Mathieu Deplagne in the 41st minute and Tyton in the 81st due to injury.

With his club playing the third of five games in 16 days, Vanney made seven changes to his starting 11. Coming into the lineup were Quentin Westberg, Eriq Zavaleta, Brazil's Auro, Liam Fraser, Jayden Nelson, Gonzalez and Mullins.

It marked the first official league start for Nelson. The 18-year-old midfielder started in Toronto's round-of-16 loss to New York City FC at the MLS is Back Tournament on July 26 but that game did not count in the regular-season standings.

The contest at an empty Nippert Stadium was Toronto's second straight on artificial turf, following a 1-0 midweek win at New England's Gillette Stadium.

Prior the match, Toronto announced that backup 'keeper Alex Bono would be out two to three weeks after undergoing surgery to repair a dislocated finger suffered in training Saturday. Kevin Silva dressed as Westberg's backup.

Toronto plays the New York Red Bulls on Wednesday and Atlanta United on Sunday with both games at its pandemic home away from home in East Hartford.

This report by The Canadian Press was first published Oct. 11, 2020