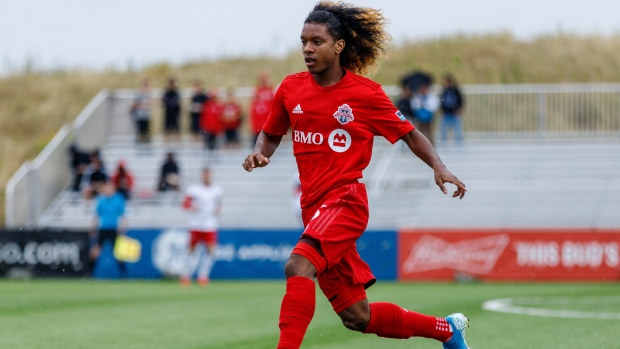 Toronto FC 2's Jayden Nelson is seen in this undated handout photo. It's been a dizzying ride of late for Jayden Nelson. THE CANADIAN PRESS/HO, Lucas Kschischang*MANDATORY CREDIT*

It's been a dizzying ride of late for Jayden Nelson.

Last year, the young forward from Brampton, Ont., made his pro debut with Toronto FC 2, turned 17, represented Canada at the FIFA U-17 World Cup and was named Canadian Youth International Player of the Year. He kicked off 2020 by making his senior debut Jan. 7 and scoring his first goal three days later in a pair of 4-1 wins over No. 162 Barbados.

Nelson and 73rd-ranked Canada faced No. 39 Iceland in an international friendly Wednesday at Irvine, Calif.

The Canadian men, who currently stand seventh behind No. 69 El Salvador in CONCACAF, are looking to pick up FIFA ranking points in their bid to crack the top six in the region by the close of the June international window.

The top six in CONCACAF, which covers North and Central America and the Caribbean, will advance to the Hex - the most direct route of World Cup qualifying out of the region.

Nelson acknowledges he has felt nerves during his rapid rise - a lot has happened since he attended his first Canadian youth camp in 2016. But his confidence has grown in meeting the challenges along the way.

“To be honest, everything is moving really fast right now,” he said in an interview from California. “But I take it step by step and just remain humble and work hard every day.”

Nelson, who turned 17 on Sept. 26, replaced Jay Chapman in the 67th minute in the Jan. 7 game to become the third-youngest player to debut for Canada (behind Domenic Mobilio and Alphonso Davies).

Three days later, Nelson came off the bench in the 59th minute and opened his senior account in the 86th minute after an errant clearance by the Barbados goalkeeper gave the teenager an open net to shot at from just outside the penalty box.

“First goal, second cap. I was just honoured to score for Canada,” he said.

It was a far cry from the emotions he felt stepping on the Canada training field for the first time in a group that included Samuel Piette and Manjrekar James.

“I was nervous because growing up I'd seen them playing on the national team,” Nelson said. “It was kind of a surreal feeling - playing with them on the same pitch. But after I got into it, they welcomed me with open arms.”

Canada coach John Herdman continues to live up to his mantra when choosing talent - if you're good enough, you're old enough.

Nelson, who joined the Toronto FC academy in 2017, made his pro debut for Toronto FC 2 on April 6 against Orlando City B and appeared in 14 games last season. He has yet to appear for the first team although he has trained with them and will likely do so again when pre-season starts next week.

While Jacen Russell-Rowe, a fellow highly touted TFC academy prospect, recently committed to the University of Maryland, Nelson plans to remain at TFC and go the pro route.

“I learned a lot from that tournament. A lot of learning experiences within each game,” he said.

“It was a great experience overall,” he added. “Tournaments like that really help players grow into the future, to be able to go to camps like these and perform well.”

His preferred position is left wing, although he likes to roam inside. Nelson is a shifty player with great vision, happy to take players on and dip into his bag of tricks when needed.

“I've always had it. That's my trademark,” Nelson said of his wild hair.

Is it easy to look after, he was asked?

“No. But it's worth having, it's worth going through all the hard work,” he replied with a chuckle.